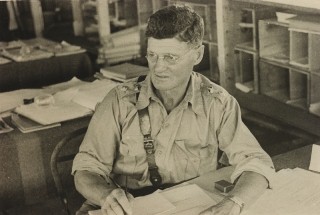 A collection of medals and memorabilia belonging to Australia’s most decorated soldier, Harry Murray, has gone on display at the Tasmanian Museum and Art Gallery (TMAG).

Lieutenant Colonel Henry William “Harry” Murray (1 December 1880 – 7 January 1966) was an Australian recipient of the Victoria Cross, and he is described as the most highly decorated infantry soldier of the British Empire during the First World War and Australia’s most decorated soldier.

Born near Evandale in Tasmania, Harry Murray left school at fourteen years of age to work on the family farm before joining the Launceston Volunteer Artillery Corps in 1902, serving until 1908.

Harry Murray was awarded a Victoria Cross (VC) for his actions during an attack on the German position of Stormy Trench in 1917.

The items on display are held in private collection by Harry Murray’s family and have been loaned to TMAG and QVMAG specifically for this display.

The display includes Harry Murray’s bar of medals and military issue items such as Murray’s slouch hat and compass, as well as souvenired items including original maps used in the Gallipoli campaign.

The display will be open to the public at TMAG until 8 May 2011, and will subsequently travel to the QVMAG.

The Tasmanian Museum and Art Gallery would like to acknowledge Senator Guy Barnett for his assistance with the negotiations between the institutions and the Murray family.