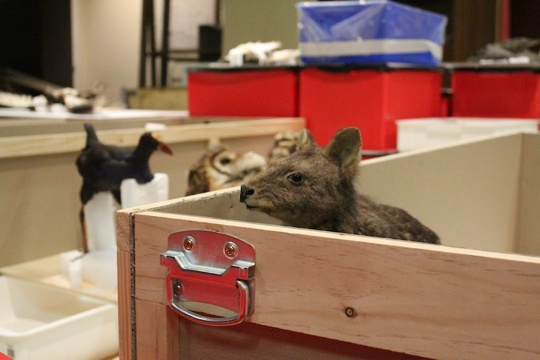 TMAG's favourite attractions have bid a temporary farewell to their long-time home in the Museum's Zoology Gallery.

More than 100 reptiles, marsupials, birds, arachnids and other critters have been removed from the popular gallery in final preparations for the start of the Redevelopment.

A team of TMAG staff has again spent the last week de-installing the mounts from the cases, perches and dioramas around the Zoology Gallery, in one of the largest jobs in more than 100 years, preparing it for its renewal during 2012.

Again a mix of conservators, curators, registrars, technicians and general staff have banded together to complete the massive undertaking.

As well as carefully listing all the creatures and removing them from their locations, the staff have been checking their condition before gently preparing them for storage.

The Zoology Gallery, which has remained largely unchanged for generations of visitors, is easily one of the most popular destinations within the Museum.

The gallery will undergo and major transformation to become the central gallery in the redeveloped TMAG.

What will take their place in the new central gallery will be revealed when the new museum opens its doors in 2013.