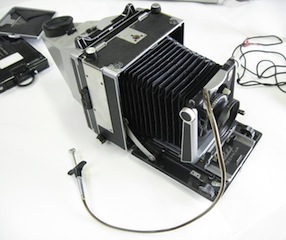 To mark the 15th anniversary of his death, renowned photographer and conservationist, Peter Dombrovskis is being commemorated at the Tasmanian Museum and Art Gallery (TMAG) through a collection of his rafting and photographic equipment.

TMAG director, Bill Bleathman, said the collection celebrates Dombrovskis’ great passion for the Tasmanian wilderness and includes some items on public display for the first time,

“These items provide a glimpse into the life and work of the man behind some of the most famous photographic images of Tasmania,” Mr Bleathman said.

The display includes Dombrovskis’ inflatable raft, paddle and buoyancy vest which were donated to TMAG by his family in 2009. It also includes a number of items from the Franklin ‘No Dams’ campaign.

The raft was purchased by Dombrovskis in 1979 for his trip down the Franklin River. During the trip, he took the photographs that played an influential role in the campaign. The famous campaign’s aim was to prevent the lower reaches of the river being flooded by the Gordon-below-Franklin dam in 1983.

Mr Bleathman said Dombrovskis’ image Morning Mist, Rock Island Bend, Franklin River, South-West Tasmania was adopted by the Tasmanian Wilderness Society in its efforts to save the Franklin. It was published in newspaper advertisements during the 1983 federal election campaign.

“Dombrovskis’ iconic image Morning Mist, Rock Island Bend has been described as the image that saved the Franklin, a fitting tribute given his great love of the Tasmanian wilderness,” he said.

“The Dombrovskis family’s generosity in entrusting these items to TMAG allows us to celebrate Peter Dombrovksis’ life, his passion for the Tasmanian environment and his contribution to saving the wilderness areas he loved most.”

Also featured in the display is camera equipment that Dombrovksis carried while rafting and photographing in Tasmania’s wilderness areas. This equipment is on loan to TMAG from the Dombrovskis family.

Peter Dombrovskis died in March 1996 while taking photographs in the remote Western Arthur Range. In 2003, he became the first Australian to be inducted into the International Photography Hall of Fame.

The collection will be on display at TMAG until July.