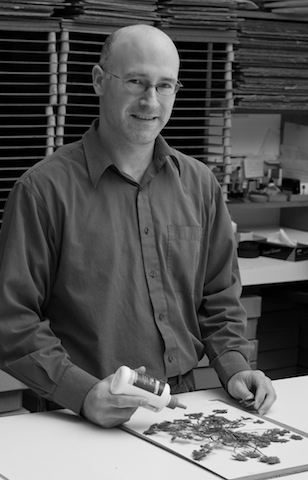 Dr. Miguel de Salas has joined the team at the Tasmanian Herbarium as the new Botany Curator.

Spanish-born Miguel moved to Tasmania with his family in 1993.

He studied science at the University of Tasmania, where he majored in botany, before going on to complete a Ph.D. in aquatic botany.

After his studies Miguel worked for several years as a research associate and then as a research fellow in algal taxonomy, genetics and biotechnology.

As part of this work he described a new genus of dinoflagellates and several (11) new species.

Following this he worked for two years in Antarctic aquatic botany and microbiology at the Australian Antarctic Division.

After a successful Antarctic voyage last summer Miguel commenced work at the Herbarium in February as a curator.

He is carrying out original research on Tasmanian vascular plants and is already working on the 2012 Census of Tasmanian Vascular Plants.

He is also writing treatments for the Flora of Tasmania Online.