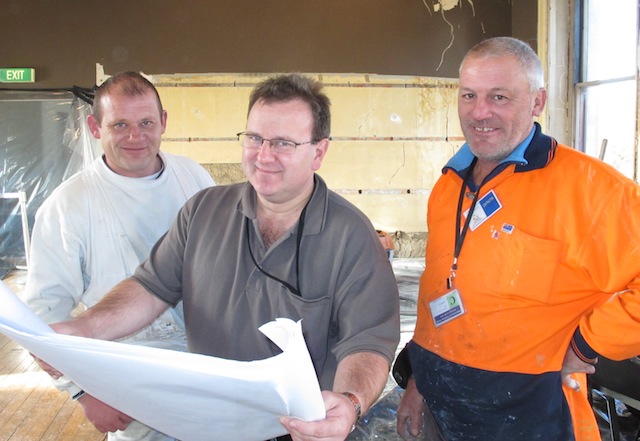 When it comes to plastering jobs they don't come much more difficult than TMAG's former Maritime and Pacific Galleries.

The 122 year old room, part of the original Museum building designed by Henry Hunter, has been stripped back to its original walls, also revealing the long-hidden windows.
The room is now showing its age in all its cracked and faded glory.
That's where Glenn Newstead and Peter Fitzgerald come in.
The pair has begun the challenging job of patching the plastering in the gallery to bring it back to what it looked like when it opened in 1889.
Before functioning as the Maritime and Pacific Galleries the space has served as the original art gallery then the Ethnological Room.
It's not your standard plaster job either.
Glenn and Peter will be working with lime plaster to match what was used when the room was first opened.
After careful preparation work they have to mix up slaked lime and river sand to apply to the heritage-listed walls.
"You just can't throw it on like normal plaster, you can't put it on too thick either," said Glenn.
Into the mix goes plumbers hemp to give the plaster its strength.
When the walls were originally plastered they would have used horse or cow hair.
The two will spend most of this first week getting the initial coat on.  They then have to wait and see how long it takes to dry, which can be at the mercy of the Hobart weather. With three coats needing to be applied they've allowed up to a month to complete the job.
Old buildings and old-fashion techniques of plastering, painting and carpentry are nothing new to Glenn. He's worked on numerous heritage listed buildings such as Brickendon and Woolmers. He's also plied his trade in remote locations such as Maria, Bruny and Maatsuyker islands, with their iconic convict buildings and lighthouses.
Visitors will be able to enjoy Glenn and Peter's handiwork at their leisure when the room temporarily hosts the Cafe and Museum Shop from early September.

Until then there's plenty of work to be done.