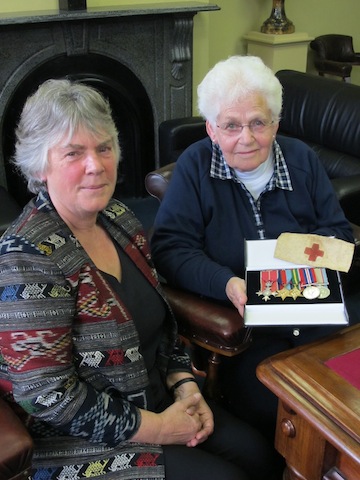 The Director of the Tasmanian Museum and Art Gallery, Bill Bleathman, said today the museum was honoured to receive a Tasmanian World War II chaplain’s collection of military medals.

John May’s Member of the Order of the British Empire (MBE) and several of his military service medals, which were recently purchased by a group of anonymous benefactors, were presented to TMAG by members of his family today.

“I am pleased the generosity of these benefactors has enabled TMAG to acquire these medals, whilst also allowing Mary May to raise funds towards a permanent memorial to commemorate the sinking of the Montevideo Maru,” Mr Bleathman said.

John Lovatt May MBE was born in Tasmania and educated in Penguin, Queenstown and Hobart before completing theological studies at the Australasian College of Theology. In 1940, he enlisted in the Australian Imperial Forces as a chaplain and served with the 2/22nd Battalion which was sent to garrison Rabaul in New Guinea in 1941.

When the Japanese invaded Rabaul in January 1942, John May was taken prisoner along with over 1 000 other Australian troops and civilians, many of whom subsequently embarked the Montevideo Maru bound for Hainan in south China.

On 1 July 1942, the Montevideo Maru was torpedoed and sunk off the Philippines, and over 1 000 Australian troops and civilians perished in what remains as Australia’s worst disaster at sea.

Although John May was not aboard the Montevideo Maru, he tended the men of the 2/22nd Battalion as soldiers and as prisoners. After the war, he was always concerned that efforts be made to recognise the terrible loss of both troops and civilians on the Montevideo Maru.

He was awarded the MBE in 1947 for his actions as a prisoner of war (POW) in maintaining morale of troops and POWs in World War II.

“I am pleased that through this gift, John May’s medals will enable TMAG to continue to tell the stories of Tasmanians who have made such important contributions through their service to their country,” Mr Bleathman said.