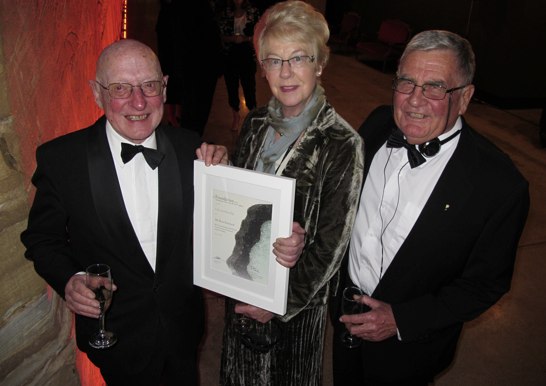 Issued by the Council of the Foundation, with the unanimous endorsement of the Board of Trustees, this Life Membership is only the third to be awarded and recognises the invaluable contribution Ross has made to TMAG.

Ross was a founding member of the Friends of the Museum and has served on that group's Committee for the past 16 years.For the same 16 years. Ross has held various voluntary positions on the Foundation Council including the roles of Honorary Treasurer and Honorary Secretary - the latter a role he continues to fulfil.

Attending the Museum’s city site each week to attend to administrative matters, Ross has consistently provided an average of 10 hours each week. Over the length of his voluntary service, Ross has contributed more than 7,600 hours of his time.

Ross was presented with a commemorative certificate by Trustee Chairman Sir Guy Green, during official proceedings at a Foundation function celebrating the opening of Theatre of the World at MONA.

“Ross has made a tremendous contribution to TMAG” said Director Bill Bleathman.“

His dedication is a testament to his community-mindedness and generosity.”