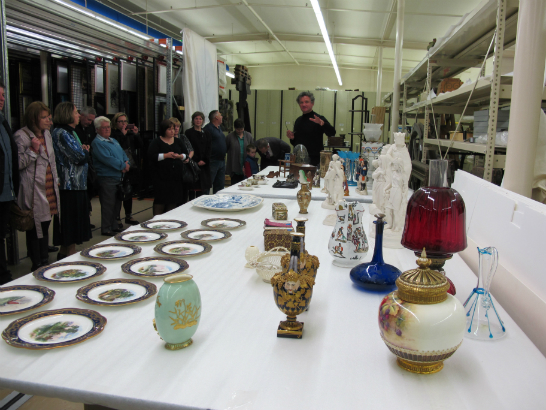 Family and friends of former Tasmanian George Wilson, who passed away in Melbourne earlier this year, gathered to celebrate his life and his generous donation to TMAG.

Mr Wilson and his partner Gino Codignotto had spent many years collecting art work and decorative art objects, amassing an impressive collection at their Melbourne home.

When Mr Codignotto passed away in 2001, Mr Wilson continued to add to their collection.

In 2011 after being diagnosed with cancer, he contacted Mr Bleathman and offered TMAG the opportunity to select suitable items for the State Collection.

Curators Sue Backhouse and Peter Hughes then travelled to Melbourne, where they enjoyed Mr Wilson’s hospitality and selected paintings, watercolours and decorative arts items to eventually be sent back to Tasmania.

“George wanted to have his treasures around him while he stayed in his home but he was happy knowing that they ultimately would be carefully packed and collected for delivery to Hobart,” Sue said.

Mr Bleathman told those at the gathering that while the TMAG staff didn’t know Mr Wilson as well as his family and friends, he left a lasting impression on all of them.

“He had the most lovely nature and was warm, happy and frank about his circumstances – and he also had a lovely sense of humour,” Mr Bleathman said.

“George and Gino’s collection was beautifully displayed and cared for by people who not only relished the collecting but also the keeping of objects.

“George knew every piece, its history, where it was collected from and where it sat in the broader scheme of collecting.”

Family and friends were able to view a selection of objects, which are awaiting registration at the Rosny facility, and were impressed by what they saw.

A letter from Mr Codignotto’s relatives in Italy was also read out, expressing the family’s pride that the couple’s collection was now part of TMAG.

“Through George’s selfless generosity, the treasures of his and Gino’s lifetime are now safely in the hands of the people of Tasmania as part of the TMAG State Collection,” Mr Bleathman said.

“We greatly appreciate George and Gino’s generous bequest, and I am so pleased to have had the chance to thank their friends and family in person on behalf of TMAG."