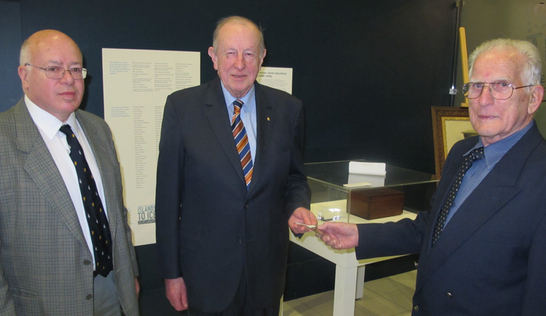 A significant piece of Antarctic exploration history, with a poignant story attached, has now found a new home at the Tasmanian Museum and Art Gallery (TMAG).

TMAG Director Bill Bleathman welcomed the acquisition of a Polar Medal awarded to Dunalley man Tasman Spaulding, who helped in the effort to rescue Captain Scott from the Antarctic in 1903-04.

“Mr Spaulding served as an Able Seaman on the Terra Nova, one of the two relief ships that went down to the Antarctic to effect the rescue of Captain Scott,” Mr Bleathman said.

“In 1904, the Polar Medal was inaugurated for members of Captain Scott's first expedition to Antarctica, and Mr Spaulding was one of those recommended for the honour.”

However, TMAG Cultural Heritage Curator Elspeth Wishart said due to a cruel twist of fate, Mr Spaulding never received his medal and it has been sitting unclaimed for the past 108 years.

“Due to a clerical error, Mr Spaulding’s first and last names were transposed on the medal, and it was gazetted to an S. Tasman,” Ms Wishart said.

“When no-one of that name came forward to claim it, the medal remained in the United Kingdom.”

“Mr Dartnell has been researching this sad story, and in an effort to try and right the wrong he retrieved the medal from its custodians, the UK Polar Medal Committee,” Ms Wishart said.

“We are delighted to assist Mr Dartnell’s efforts by providing a new home for the medal here at TMAG.”