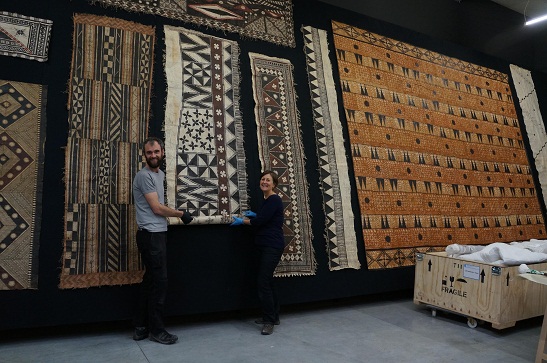 Tasmania’s State Collection is making its mark on the international stage as a major part of the landmark exhibition Theatre of the World, which opens in Paris on Friday, 18 October 2013.
Premier and Minister for the Arts Lara Giddings MP said she was delighted that the Tasmanian Museum and Art Gallery (TMAG) and Museum of Old and New Art (MONA) collaborative exhibition will be at La Maison Rouge gallery for the next three months.
“Approximately 200 objects from TMAG’s State Collection, including the majestic tapa cloths, and about 100 items from David Walsh’s MONA collection have travelled to Paris,” Ms Giddings said.
“La Maison Rouge is one of Europe’s leading private galleries, and this is the first time it has shown a major Australian exhibition.
“This is not only a first for TMAG, MONA and La Maison Rouge, it is also a real coup for Tasmania to be represented on the international cultural stage.”
Ms Giddings said she was delighted that TMAG would have a strong presence in Paris as part of the exhibition.
The museum has received funding from the Department of Foreign Affairs and Trade, which has allowed it to host a seminar about its collections at La Maison Rouge on Saturday, 19 October 2013.
“I am so pleased that the funding has meant four TMAG curators have been able to travel to Paris to present at the seminar and discuss our State Collection in depth,” Ms Giddings said.
“It’s a great chance to educate an international audience about the diversity of art, history and science in Tasmania, and also showcase the wealth of knowledge TMAG staff possess.”
Chairman of TMAG’s Board of Trustees Sir Guy Green and TMAG Director Bill Bleathman are also representing the museum in Paris for the exhibition opening and seminar.
“Theatre of the World at La Maison Rouge is the largest exhibition of our objects ever to be shown outside Australia in the museum’s 150 year history,” Sir Guy said.
“It is an honour for the museum to be able to bring its collection to French audiences and lift Tasmania’s cultural profile in Europe.”
Mr Bleathman said he was particularly proud that the expertise of TMAG’s hard-working curatorial staff was also gaining an international platform.
“Our curators will be discussing the significance of TMAG’s natural history, colonial art and Tasmanian Aboriginal collections,” Mr Bleathman said.
“They will also explain the provenance of our magnificent collection of tapa cloths, which are a real highlight of Theatre of the World.
“A key theme of the seminar will be the links between our State Collection and the early French explorers who came to Tasmania.
“I am sure that both French audiences and our own curators will be greatly enriched by this experience.”
TMAG curatorial staff who will be presenting at the seminar at La Maison Rouge:
Jane Stewart, Coordinating Curator of Art
Using artworks in Theatre of the World as examples, Jane’s presentation will explore the relatively brief but profoundly impacting Tasmanian colonial period, the collision of radically different cultures, and the visual record created by French and British artists at this time.
Cathy Byrne, Senior Curator, Zoology
Cathy’s presentation will highlight the diversity of TMAG’s natural history collections represented in Theatre of the World, and discuss the uniqueness of Tasmania’s fauna and the important role played by the early French scientific explorers.
Tony Brown, Senior Curator, Indigenous Cultures
Tony will discuss the first encounters Tasmanian Aborigines had with the early French explorers, as recounted in TMAG’s new exhibition Our land: parrawa, parrawa! Go away! He will also outline TMAG’s projects which support Tasmanian Aboriginal people in continuing their traditional cultural practices.
Kirsten Brett, Cultural Heritage Collection Manager
Kirsten will discuss the stories behind TMAG’s magnificent collection of tapa cloths, which are a key element of the Theatre of the World exhibition. She will discuss how they were collected from various regions of the Pacific, and explain how such a diverse collection managed to end up in TMAG’s possession.
Theatre of the World is at La Maison Rouge gallery in Paris until 12 January 2014. For more information visit the gallery’s website www.lamaisonrouge.org (an English translation button is available).
For news about TMAG’s curators in Paris, check the museum’s Facebook page www.facebook.com/tasmuseum or Twitter feed www.twitter.com/tasmuseum.