The Tasmanian Museum and Art Gallery (TMAG) is delighted to welcome the first major survey exhibition of Tasmania’s award winning artist, Philip Wolfhagen, to our Argyle Galleries from today.
Illumination: The art of Philip Wolfhagen has been developed in partnership between the Newcastle Art Gallery and TMAG, and features over 50 key works.
“This major touring exhibition had its first showing at the Newcastle Art Gallery in June of this year and I am delighted that TMAG is the next host before the exhibition goes on to tour other states and the ACT,” TMAG Director, Bill Bleathman said.
“It is indeed a great honour to be part of the team bringing the work of this important Tasmanian artist to national prominence.
“TMAG has worked closely with the Newcastle Art Gallery and the artist and we look forward to developing more collaborative exhibitions of this type into the future.”
The exhibition will feature at seven venues across four states and the Australian Capital Territory.
Based in Longford, Wolfhagen has always been committed to the landscape genre which has a long tradition in Australia, saying he strives “to see the landscape in a new way and to feel as passionate about painting it as I do about preserving it.”
Wolfhagen is described as a master of creating works that capture changing light, mood and atmosphere and considers himself a ‘stay-at-home kind of artist’ and says of his work “I want to paint what I understand and love and not rush about being a tourist artist.”
It is not only the Tasmanian subject matter and his portrayal of it that makes his work so fascinating but the surface itself, created by a process of mixing beeswax with his colour pigments giving the works a luscious, creamy tactile quality.
“Wolfhagen is one of Australia’s most insightful landscape painters. He is one of three Tasmanians represented in the celebrated exhibition Australia that opens next week at the Royal Academy in London,” TMAG’s Principal Curator of Art, Jane Stewart said.
“I urge everyone to come and experience the evocative paintings that make up this stunning exhibition.”
The exhibition is accompanied by a major publication sponsored by the Gordon Darling Foundation that features six new essays on the artist including The island seen and felt: some thoughts about landscape by renowned Australian author, Tim Winton.
Illumination will tour to the ACT, Queensland, and Victoria, assisted by the Australian Government through the Australia Council, and supported by the Newcastle Art Gallery Foundation and International Art Services, and in Tasmania by the Friends of TMAG.
The travelling exhibition schedule is as follows:
Tasmanian Museum and Art Gallery: 13 September - 1 December 2013
Australian National University Drill Hall Gallery (ACT): 20 February - 6 April 2014
Cairns Regional Gallery (Qld): 9 May - 6 July 2014
Twee River Art Gallery (NSW): 8 August - 12 October 2014
Hamilton Art Gallery (Vic): 15 November 2014 - 1 February 2015
Gippsland Gallery (Vic): 14 February - 12 April 2015 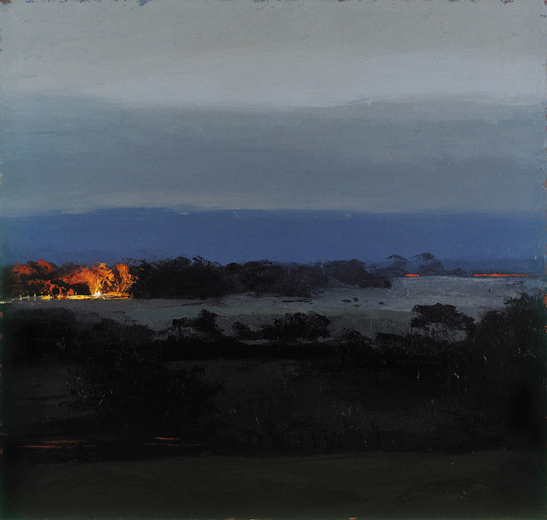 Purchased with funds from the Victorian Foundation for Living Australian Artists, 2006