A glimpse of Hobart Town 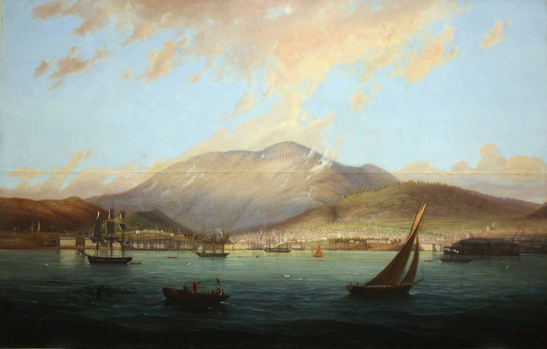 Visitors to the Tasmanian Museum and Art Gallery (TMAG) can now enjoy a fascinating glimpse into Hobart’s past thanks to the loan of a painting by a notable convict artist.

Hobart Town by Knut Bull (1811-89) is an impressive and splendidly detailed picture of the city in 1854, and has been generously loaned to TMAG by the Foster family in memory of the late Francis Henry and Patricia Ainslee Foster.

The painting depicts a lively and industrious city: ships and dinghies move about the harbour, smoke plumes from the chimneys of houses and businesses, and paddocks encircle the town.

The many landmarks featured in the painting include the Bond Store (now part of TMAG), Customs House (now Parliament House), St David’s Cathedral, and the original Government House that stood where Town Hall is today.

Knut Bull painted at least four water views of Hobart, and one very similar to Hobart Town was exhibited at the Paris Exhibition in 1855.

A Foster family spokesperson believes the painting might have been commissioned by the Colonial Office to hang in London.

Such a scenario is likely but requires confirmation, for the painting emphasises the city’s Arcadian and industrious aspects and reveals none of the hardships experienced by the colonists – this is precisely the vision the colonial authorities would have wished to present to Europeans to attract more migrants.

Born in Norway, Bull was trained in Germany before making his way to London. In 1845 he used his artistic skills to forge a promissory note, an act which saw him transported to Norfolk Island for 9 months before being transferred to Van Diemen’s Land to serve the remainder of a 14 year sentence.

In 1849 Bull was granted a probation pass for good conduct, enabling him to receive private payment as an artist, and during the early 1850s he was the only professional landscape painter living in Hobart. He received his ticket of leave in 1852 and finally a conditional pardon in 1854 – Bull left Tasmania two years later never to return.

This is the second time Hobart Town has been loaned by the Foster family to TMAG, after it was first on public display at the turn of last century, and was photographed in what is now known as the Central Gallery. The painting then returned to the family home where it has remained until now.

At TMAG, Hobart Town will sit beside similar vistas by colonial artists such as Henry Gritten and John Glover, establishing a tapestry of views of the developing town of Hobart in the idiosyncratic styles reflecting the diverse artistic voices from Europe and the fledgling colony.

Hobart Town by Knut Bull will be on display in the Dispossessions and Possessions gallery (Henry Hunter galleries, level 2) from Friday 19 December 2014.