Tasmanian Museum and Art Gallery (TMAG) zoologists and botanists are currently out in the field alongside a select group of scientists from around Australia, taking part in a ten-day Bush Blitz survey on Tasmania’s Central Plateau.
Bush Blitz is a nationwide project that aims to document the flora and fauna of Australia’s nature reserves and to promote the discovery and description of new species found there.
The project is funded by the Australian Government’s Australian Biological Resources Study (ABRS) and by BHP Billiton, and runs in partnership with Earthwatch Australia.
Between them, these organisations provide the bulk of the funding, infrastructure and manpower needed to coordinate and support a series of discrete Bush Blitzes right around Australia.
State museums contribute most of the taxonomic experts specialising in identifying and naming the plant and animal groups that have been identified as priority targets for surveys and collection.
A number of enthusiastic BHP employees are seconded from their jobs with BHP for the duration of the survey, during which they act as volunteer helpers, working alongside the experts in the field and helping with tasks such as setting up traps and collecting samples.
This is the first of two Bush Blitzes being held in the state this year, and is focused on the Five Rivers reserve and the nearby Gowan Brae property on Tasmania’s Central Plateau.
From the Tasmanian Herbarium the survey involves Dr Gintaras Kantvilas (lichens), Dr Miguel de Salas (native plants), and Matt Baker (weeds), while from TMAG’s Zoology unit it involves Dr Cathy Byrne (moths), Dr Simon Grove (beetles and other insects) and Kirrily Moore (invertebrates).
Other specialists on the survey include Dr Kevin Bonham (snails), Dr Gerry Cassis (bugs), Dr Robert Raven (spiders) and Abbey Throssell (dragonflies).
In the fullness of time, most of the specimens collected will be identified and added to the TMAG collections.
The scientists expect to find quite a few undescribed species, and aim to formally describe many of these as new to science.
Watch this space to find out more about the discoveries made by TMAG BushBlitzers once they’ve returned from the field.
Learn more about the Australia-wide project at the Bush Blitz website.
Bush Blitz is an innovative partnership between the Australian Government, BHP Billiton Sustainable Communities and Earthwatch Australia that is helping fill the gaps in our knowledge of biodiversity within Australia’s national system of conservation reserves.
Image captions: 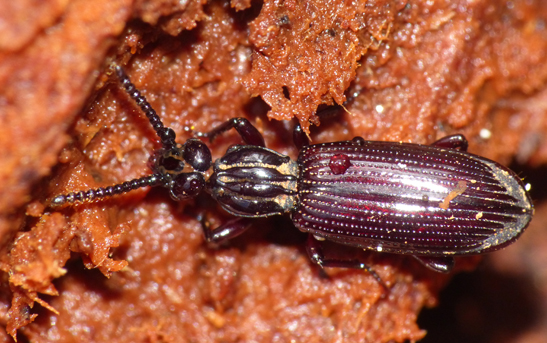