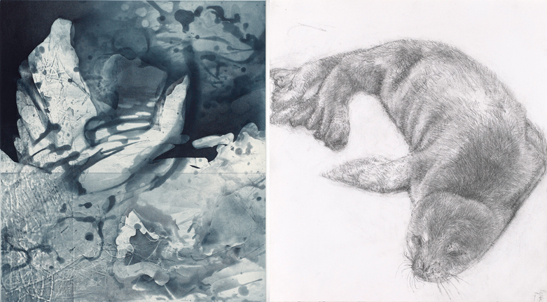 The Tasmanian Museum and Art Gallery (TMAG) has a long and proud tradition of supporting local artists in order to highlight the depth of talent we have in Tasmania.
The consummate drawing skills of Tasmanian artist George Davis are revealed in the exhibition George Davis: Master Draughtsman, which opens at the museum tomorrow.
Works by Davis have been the subject matter of a number of survey exhibitions over the years, and TMAG holds a number of his paintings and drawings in its permanent collection.
Born in Hobart in 1930, Davis initially studied under Jack Carington Smith and Dorothy Stoner at the Hobart Technical College, before being awarded a Tasmanian travelling scholarship to attend the Royal Academy Schools in London in 1951.
Well-informed about the natural environment, having spent many years on trips living close to the elements and working alongside scientists, Davis is perhaps best known for his paintings and drawings celebrating the landscape and bird and animal life of remote islands off the Tasmanian coast.
He is also much sought after for his portraits, many of which depict friends and family as well as more well-known sitters such as botanist Dr Winifred Curtis and poet Vivian Smith.
Included in the exhibition are his paintings of remote off-shore islands, detailed studies of flora and fauna, a selection of portraits, as well as drawings of his daughter, actress Essie Davis, perhaps best known as ABC TV character Miss Phryne Fisher.
Essie has flown in to Hobart especially for the opening of the exhibition, and this morning took time to speak to local media alongside her father.
Also opening tomorrow is an exhibition of the complete series of Antarctic prints presented by the late Jorg Schmeisser to TMAG in 2012.
The etchings were produced between 1998 and 2005 after he received an Australian Antarctic Arts Fellowship to visit Antarctica.
From a voyage of discovery and exploration, Schmeisser has created images revealing the imposing grandeur of Antarctica’s icy wilderness.
George Davis: Master Draughtsman and Jorg Schmeisser: Antarctic Prints are on show in TMAG’s Argyle Galleries from 6 December 2014 until 1 March 2015.
Image details:
Left: Jorg Schmeisser (1942-2012), Figuration 2002, etching A/P, presented by the artist under the Cultural Gifts Program, 2012.
Right: George Davis (b. 1930), Weddel Seal pup (Leptonychotes weddelli) 1983-84, pencil, private collection.