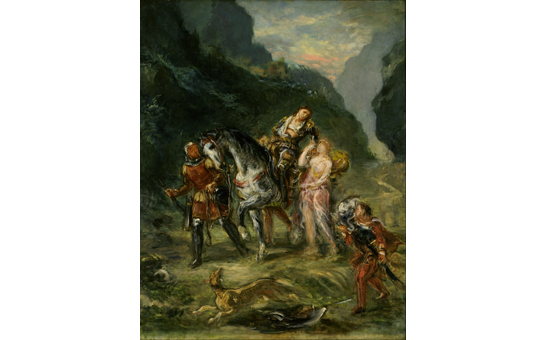 The Tasmanian Museum and Art Gallery (TMAG) is delighted to be showcasing a significant work by renowned French Romantic painter Eugene Delacroix during this year’s Hobart Baroque festival.

Angelica and the wounded Medoro is on loan from the Art Gallery of New South Wales, and is now on display in Argyle Gallery 4.

Orlando is being performed at Hobart’s Theatre Royal as the centrepiece of Hobart Baroque 2014.

At 38,736 lines, Orlando furioso is one of the longest poems in European history, and relates the tale of Charlemagne’s most famous paladin Orlando, who has fallen madly in love with Angelica.

However Angelica has in turn fallen for the wounded Saracen warrior Medoro.

The poem’s title refers to the grief and insanity that grips Orlando when he discovers that Angelica and Medoro have married and eloped overseas.

Due to its significance and value, much care was needed to transport the painting to Hobart from Sydney, with TMAG and Art Gallery of New South Wales staff working closely together to ensure its safe passage.

The painting was unveiled at TMAG today by Their Excellencies the Governor of Tasmania Peter Underwood and the Governor of New South Wales Professor Marie Bashir, ahead of tonight’s official opening of Hobart Baroque.

Angelica and the wounded Medoro is on show at TMAG until Sunday 6 April 2014.

TMAG Coordinating Curator of Art Jane Stewart will be giving special talks about the painting at 11:00 am on Saturday 29 and Monday 31 March, and Tuesday 1, Wednesday 2 and Thursday 3 April 2014. The talks are free and no bookings are required.

You can also learn more about Hobart Baroque 2014 at the festival website.