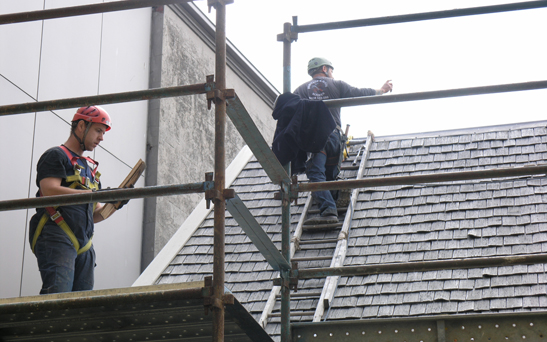 Workers have been busy on the roof of one of Tasmania’s oldest buildings in recent weeks, making sure its history is preserved for future generations.
The Private Secretary’s Cottage is the second oldest building in the Tasmanian Museum and Art Gallery (TMAG) precinct, and was built in about 1813-14.
It is located on a bank above a remnant of Hobart’s original foreshore, the site where the European settlement of the city began.
Originally an industrial building, it became a private residence in 1829 when Lieutenant-Governor Arthur’s private secretary moved in, and it was home to official secretaries and aides-de-camp for nearby Government House (located where Franklin Square now stands) until 1857.
Throughout its long life, the Private Secretary’s Cottage has been used as a dwelling, a timber store and a museum office, had a wall knocked down, gained and then lost its veranda, gained some unsympathetic additions and alterations, and been threatened with demolition.
However, the building is now an important part of the TMAG site, and so when staff noticed the shingled roof was beginning to show signs of wear and tear due to weather damage, action was needed.
The roof was last shingled in 1994, and some shingles were starting to come away completely, so immediate repairs had to be undertaken in order to ensure the integrity of the building.
Heritage Tasmania-approved contractors are now undertaking the repairs, and the work is expected to be completed by the end of the month.
Due to its age and condition, the Private Secretary’s Cottage is not open to visitors daily – however visitors wanting to take a glimpse inside can join a free cottage tour at 11:00 am on Wednesdays.