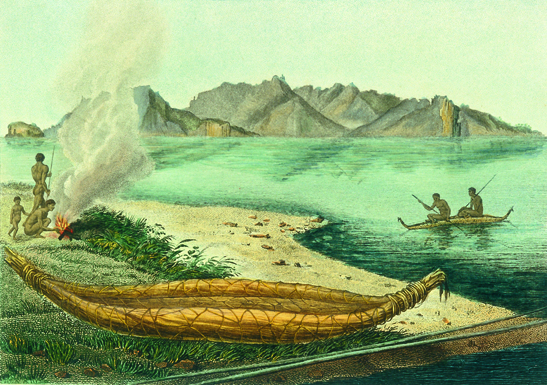 The Tasmanian Museum and Art Gallery (TMAG) is delighted to announce that an exhibition of exquisite illustrations by French artists, made during Nicolas Baudin’s 1800s exploration of Australia, will be coming to Tasmania for the first time in 2017.

As part of an agreement between the Museum of Natural History in Le Havre, France, and six Australian museums, stunning original watercolours and drawings by expedition artists Charles-Alexandre Lesueur and Nicolas-Martin Petit will be showcased at venues across the country.

In early 1802, the French explorers landed in Tasmania and spent time interacting with the Tasmanian Aboriginal people and recording their language and culture, flora and fauna as well as collecting cultural objects and specimens.

Most of the anticipated 100 illustrations to be included in the planned touring exhibition have never been displayed in Australia before. The drawings are held permanently by the Museum of Natural History in Le Havre.

TMAG curators were able to gain a special preview of the drawings first-hand when they visited Le Havre in October 2013, as part of their trip to France for the opening of the joint TMAG-MONA exhibition Theatre of the World in Paris.

A delegation from France, led by the Mayor of Le Havre Édouard Philippe, will today attend a special function at TMAG to sign a memorandum of understanding (MOU) with the Directors of TMAG and the Queen Victoria Museum and Art Gallery (QVMAG).

“It is wonderful that after that first French encounter with Australia more than 200 years ago, we can share these discoveries and sense of wonder with Australian audiences,” Museum of Natural History Director Cedric Cremiere said.

TMAG Director Janet Carding said that the illustrations provide an opportunity to tell many of the stories associated with the interactions between the French explorers and the Tasmanian Aboriginal people.

“I am delighted to be part of a national collaboration to bring these extraordinary works to Australia and indeed to be working with QVMAG to showcase this important material across Tasmania.”

QVMAG Director Richard Mulvaney said he was pleased that two of Tasmania’s major cultural institutions were able to participate in this touring exhibition.

“I am very excited that QVMAG and TMAG are able to collaborate with each other in order to display this significant exhibition in both the north and the south of the state for the benefit of all Tasmanians,” said Mr Mulvaney.

Illustrations featured in the exhibition will include evocative portraits of Tasmanian Aboriginal people, images of their baskets and watercraft, watercolours of marine invertebrates, highly accurate profiles of the coastline, as well as drawings of Tasmanian animals such as the now extinct King Island emu.

The exhibition will open in Adelaide in July 2016, before touring the country until May 2018. It will be on display in Tasmania from early 2017.