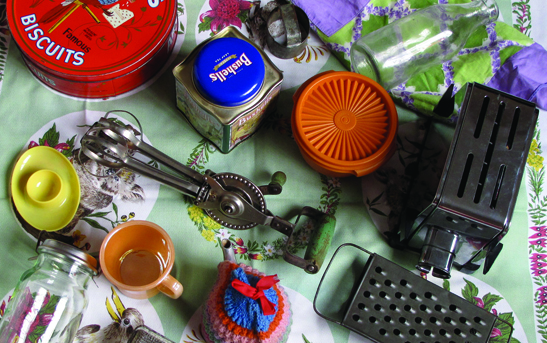 An important partnership between the Tasmanian Museum and Art Gallery (TMAG) and the University of Tasmania's Wicking Dementia Research and Education Centre has resulted in a brand new loan resource, launched today at the museum during Dementia Awareness Month.

The iRemember: In the Kitchen Memory Case is a free loan resource which aims to assist people living with dementia and their friends, families, partners and carers to communicate more easily and enjoyably with each other.

The case was developed after extensive research by the Wicking Dementia Research and Education Centre and by staff at TMAG, with 30 people living with early and middle stage dementia and their carers surveyed to explore what objects they would like included.

The 15 objects in the case were chosen for their 'memory richness', based around a kitchen theme, including a preserving bottle, a teapot and cosy, an Arnott's biscuit tin, a milk bottle, an egg beater, a Tupperware container, a soap saver and other objects.

"It's about encouraging the telling of stories and the sharing of memories, using real objects to stimulate conversation and remembering," TMAG Director Janet Carding said.

"This is a form of what is known as reminiscence therapy, and it provides a way to begin and continue conversations, to encourage people living with dementia to talk about their lives and to make connections with the people around them.

"This can help to remind everyone that what people living with dementia think and say is important and that their lives have significance."

The case is now available to borrow from TMAG for a two week period by individuals and organisations.

For more information or to book the case, contact TMAG's Centre for Learning and Discovery team.

Image: Some of the objects included in the iRemember: In the Kitchen Memory Case.