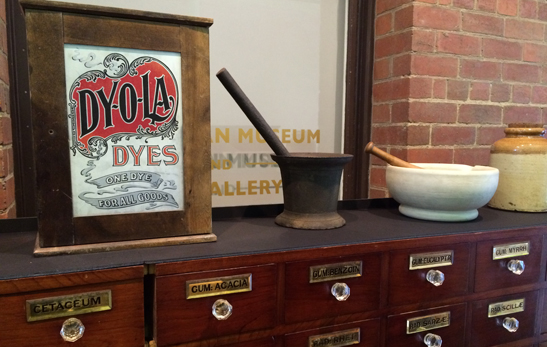 The Tasmanian Museum and Art Gallery (TMAG) is stepping back in time to celebrate a slice of Hobart's history, with a new display recreating the interior of a well-known local pharmacy in the museum's Link Foyer.

Palfreyman's Pharmacy was located on the corner of Burnett and Elizabeth Streets in North Hobart from 1912 until 1973, and became a household name in Hobart.

The pharmacy had been founded across the street by Addison Palfreyman in 1901, and the Palfreyman family continued to operate it in various partnerships until its closure.

Inside the pharmacy were cedar furnishings and shelves filled with a plethora of colourful bottles and jars often mysteriously identified with gilt labels in Latin.

The pharmacist used the equipment on the dispensing counter to make up remedies and treatments, while the wooden drawers – known as the drug run – held herbs, roots and powdered chemicals.

After the pharmacy's closure, its fittings and furnishings were collected by TMAG for the State Collection.

They have since been restored with the assistance of Pharmaceutical Defence Limited (PDL), and are now on show as part of the display, along with a variety of pharmaceutical items and remedies typical of the era.

The display provides a fascinating glimpse not only into Hobart's past, but also the history of medicine in the early 20th century.

If you had a cold, pain or more serious ailment during this time, the pharmacy would often be your first stop, as doctors were expensive and pharmacists were a cheaper alternative, able to make up and supply remedies to relieve symptoms.

The Palfreyman's Pharmacy Display is on show in TMAG's Link Foyer from 24 July until 22 November 2015.