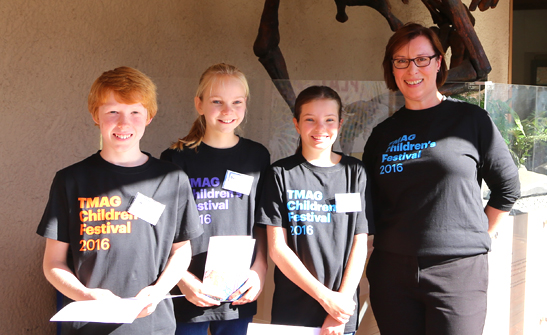 The Tasmanian Museum and Art Gallery (TMAG) today launched its inaugural Children’s Festival, which is part of the museum’s increased commitment to children and families.

It also includes a late-night Masquerade Disco, with the museum open until 8:30 pm on Friday night, as well as a special edition of TMAG’s popular Family Days to wrap up the Festival on Sunday.

The Festival is supported by the City of Hobart’s Creative Hobart Community Development Grants Program, and Lord Mayor Alderman Sue Hickey officially opened proceedings at a ceremony in the sunny museum courtyard this morning.

Director Janet Carding said the Festival was part of TMAG’s drive to encourage more children and families to engage with the museum.

“Over the past year TMAG has sought to increase its commitment to families in a number of ways, including with the presentation of our very popular Pattern Play exhibition and its associated public programming such as Family Days and the January school holiday program,” Janet said.

“The TMAG Children’s Festival extends this commitment by providing young people with the opportunity to contribute to the look and design of the festival itself, and present what’s important to them.

“A few months ago we established the TMAG Children’s Reference Panel, with members providing advice and input into the Festival program and acting as our hosts for today’s Festival launch.

“This week we are also pleased to launch our Kids in Museums Manifesto, which outlines our commitment to ensuring visitors have a family friendly experience.

“It was developed with input from the Children’s Reference Panel, as well as advice from the Commissioner for Children, Tasmania, and the Children and Young People’s Advisory Council.”