Significant pieces of colonial furniture have been presented to the Tasmanian Museum and Art Gallery (TMAG) by the Public Trustee.

A nineteenth century washstand and a leather-topped cedar table that carries an extremely rare convict signature and the iconic Government broad arrow stamp have been given to TMAG for the benefit of all Tasmanians.

The items are not part of a deceased estate but have actually been used in the Public Trustee’s offices over the past 160 years. The significance of the furniture was only uncovered by staff when they were preparing to undergo an office refurbishment.

The cedar table is particularly significant as it is one of only two known signed pieces from this era and therefore one of the very few that can be assigned to a particular convict maker.

The convict who signed the table has been identified as Michael Brandreth and the Public Trustee geneaologist, Dr Elisabeth Wilson, has undertaken some research on his story.

In 1830, at the age of 35, Brandreth was convicted of breaking into a shop and stealing. He was sentenced to transportation for life and arrived in Hobart in the same year. He was assigned to the Government’s Lumber Yard to work in his trade, cabinet making.

“It may have been during this time that he took the bold and illegal act of signing his name to his work,” Dr Wilson explains.

TMAG is delighted to have the opportunity to acquire such a significant piece of Tasmania’s history that will strengthen the State Collection, which serves as a repository of Tasmania’s cultural heritage.

“Many departments within the Tasmanian Government and public service date back to colonial times,” TMAG Director Janet Carding says.

“This acquisition from the Public Trustee highlights the importance of how significant objects representing the Government’s history can become part of the State Collection for the benefit of future generations.”

The cedar table presented by the Public Trustee will be on display in TMAG's Central Gallery  until Sunday, 28 February 2016. 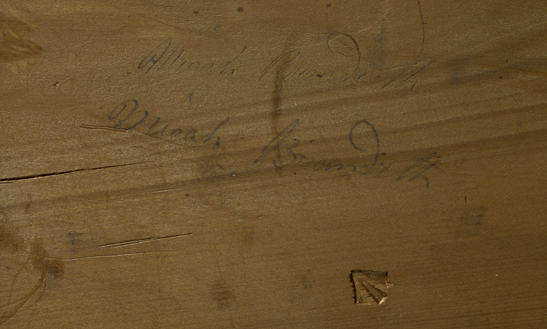