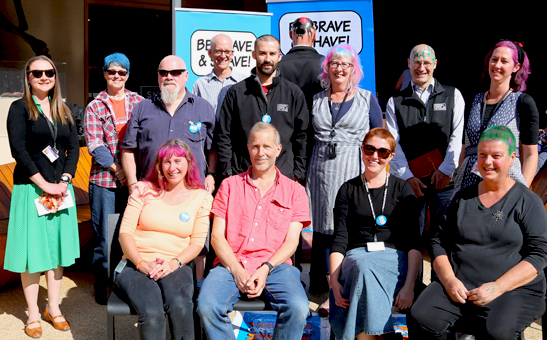 A dedicated group of Tasmanian Museum and Art Gallery (TMAG) staff have today shaved, coloured and painted their heads to raise money for the Leukaemia Foundation as part of the World’s Greatest Shave.

And in the process, the group – known as the ‘Museum Heads’ – have become the top fundraising team in Tasmania, raising over $14,000 to support those impacted by blood cancer.

The Museum Heads comprise 12 TMAG staff members and volunteers, who gathered in the museum courtyard this morning for the colouring, painting and shaving event.

Some had their hair dyed or straightened, others had their already bald pates painted, and a brave few also went the full crop.

The team was inspired to join in the World’s Greatest Shave by their TMAG colleague, Simon Grove, who is currently undergoing treatment for his second relapse of acute myeloid leukaemia.

Simon and his sons took part in the Shave last year, losing their locks at an event in the TMAG courtyard, and so this year the Museum Heads, led by their captain Ian Terry, decided to follow their example.

“It is great to see my colleagues get behind this very important cause and raise funds for the fantastic work undertaken by the Leukaemia Foundation,” Simon said.

“The Museum Heads team have put in an incredible effort to surpass their original fundraising target of $10,000 and I would like to thank them for all they have done.”

Donations have been pouring in from TMAG staff, volunteers, Trustees and membership groups, as well as family and friends, and the team has been overwhelmed by the support.

All the money raised will go to the Leukaemia Foundation, which will help them to provide support for people diagnosed with blood cancer and their families, and well as to undertake research into treatments for the disease.

Those who would still like to make a donation to the team’s efforts can visit their World’s Greatest Shave page.