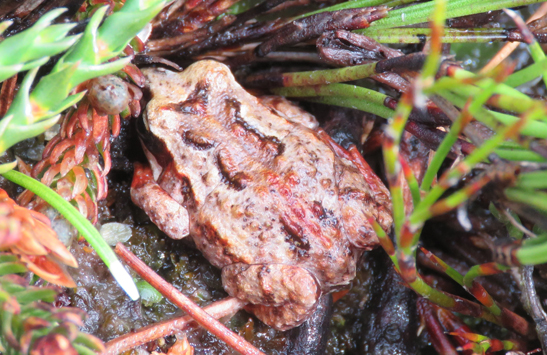 The Tasmanian Museum and Art Gallery (TMAG) has joined with museums around the country to encourage citizen scientists to take part in Australia’s first national frog count.

Led by the Australian Museum, FrogID is a citizen science project that uses mobile phone technology and “audio DNA” to discover where frogs are at risk and how to conserve them and our waterways.

The free FrogID app, developed in partnership with IBM, identifies frog species by the sounds they make – from croaks and chirps, to whistles and barks.

Organisers are hoping that up to 1 million Australians will download the app and head to their local parks, creeks, dams or wetlands to listen for frog calls.

Recording and uploading these calls will map frog species across Australia and reveal where they are at risk from habitat loss, disease, climate change and urbanisation.

Tasmania is home to 11 species of frogs, and three of these species are endemic and occur nowhere else in the world.

A number of Tasmanian frogs are threatened species and many more are at risk from the lethal chytrid frog disease.

This disease now occurs across much of the state and has been the cause of frog population decline and extinctions around the world.

Frogs have not been comprehensively surveyed in Tasmania for a long time and the population and distribution for this important group of animals needs updating.

Tasmanian frogs are generally small and inconspicuous – however each species has a distinct call that identifies them.

The Frog ID app and the citizen science project will help scientists at TMAG and elsewhere document the distribution, population and diversity of Tasmanian frogs.

The recorded calls and identifications submitted by the public will be verified by scientists and frog experts.

Having a better understanding of our Tasmanian frogs will help in conservation planning, tracking the impacts of habitat disturbance and disease and may even uncover new species of these enigmatic creatures.

Visit the Frog ID website: http://www.frogid.net.au/ for more information and instructions on how to download the app.

TMAG will be hosting the Tasmanian launch of Frog ID with a special, free talk from the Australian Museum's Dr Jodi Rowley on Wednesday 29 November at 6:00 pm in the Central Gallery. All are welcome, click here to RSVP.

Image details: A Moss Froglet (Crinia nimba), the newest addition to Tasmania’s frog family, described in 1992. This photograph was taken by TMAG’s Dr Cathy Byrne on a Bush Blitz expedition.