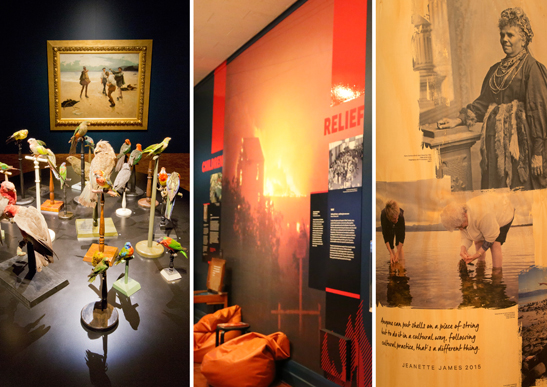 The Tasmanian Museum and Art Gallery (TMAG) has taken home several awards for its recent exhibition program, including the top national prize, at the 2017 Museum and Galleries National Awards (MAGNAs).

The MAGNAs, an initiative of Museums Galleries Australia sponsored by Panasonic, celebrate outstanding achievements in the Australian museums and galleries sector in the categories of exhibition, audience engagement and learning, and Indigenous programs.

TMAG’s major exhibitions over the last year, Tempest, kanalaritija: An Unbroken String and One Hell of an Inferno: the 1967 Tasmanian Bushfires each won the MAGNA award for their respective category.

TMAG was also announced as the 2017 overall National Winner for the Tempest exhibition. The National Winner is selected from a shortlist of the winning entries from all categories.

The national MAGNA judges praised Tempest, saying that it “exemplified many of the themes and approaches evident in most of this year’s winners”.

The judges also said that One Hell of Inferno displayed “excellence in all aspects of [the] project and its development, borne out in the way it connected with community” and said that kanalaritja: An Unbroken String was “an excellent collaborative project that supports the aspirations of Indigenous communities, utilising the museum as a force for the continuation of culture”.

The awards were presented at an awards ceremony in Brisbane last night as part of the Museums Galleries Australia 2017 National Conference.

“Being recognised by the MAGNAs is a great honour and it is an outstanding achievement to see TMAG’s impressive range of temporary exhibitions gain national recognition,” Speaker of the House of Assembly Elise Archer said.

“It also confirms TMAG’s standing as a cultural and tourism drawcard for the State, and reaffirms its importance in achieving our goal of attracting 1.5 million visitors to Tasmania by 2020.

“On behalf of the State Government, I congratulate all of the curators and staff, and urge all Tasmanians to visit TMAG to explore one of Australia’s best museum experiences right here in their own backyard.

“I also wish to acknowledge the many partners and supporters of TMAG’s winning exhibitions that have made such a rich and engaging exhibition program possible including Detached Cultural Organisation, the Australian Government through the Australia Council and the Visions of Australia program, Dark Mofo and the Tasmanian Community Fund.”

kanalaritja: An Unbroken String is currently on display at TMAG until Sunday 21 May before it embarks on a national tour.

Image details:
(pictured left to right) Tempest; One Hell of an Inferno: The 1967 Bushfires; kanalaritja: An Unbroken String