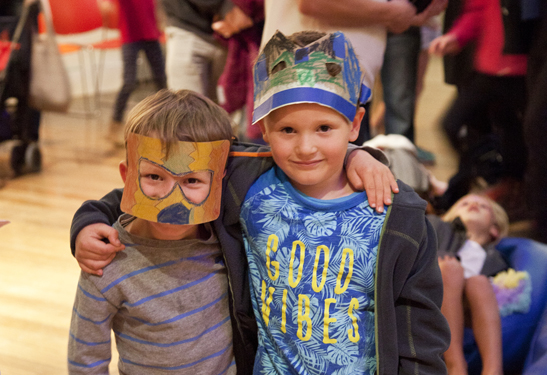 The Tasmanian Museum and Art Gallery (TMAG) will once again be turned over to younger visitors during the April School Holidays for the TMAG Children’s Festival.

This year the festival will explore all things ‘animal’, with a range of special events, displays, programs and activities for and by children running over five days from 26 – 30 April.

Visitors will be able to learn to draw cartoon animals and make animal puppets in special workshops, party at an animal-themed Kids’ Disco, meet people who work with animals every day, and much more.

And the best part is that all festival activities and events are free!

A highlight is sure to be the Festival Artists in Residence, the Trash Puppets (aka artists Jhess Knight and Katie Boon), who will encourage children to be creative using recycled and reusable materials whilst in residence at TMAG throughout the festival.

Visitors will be able to drop in to the Puppet Studio to create their own trash puppets, write or draw their puppet’s story to become part of a storybook, track a Tasmanian Devil puppet through TMAG’s galleries, and also watch a puppet performance created by workshop participants.

The performance will be the culmination of a special puppet making, story writing and performance workshop, featuring puppeteers aged 8 - 12 performing with their creations at the Festival Finale.

Other workshops during the festival will include a session on cartooning tips and tricks, as well as one led by Hobart Hackerspace teaching participants how to make and set up a camera trap to capture wild animals on film.

These free workshops have limited spaces available that will be allocated using a ballot process, and participants need to enter via the TMAG website by Wednesday 19 April.

Another highlight of the festival will be the return of the megafauna – TMAG’s much-loved models of giant extinct marsupials – which were part of the permanent galleries in decades gone by and will be on display for a limited time only in the Central Gallery during the festival.

There will be plenty of other displays to keep young visitors entertained, including the return of the Tasmanian Brick Enthusiast’s Lego display and the new exhibition Winne-the-Pooh and friends, which features original illustrations for the children’s classics Winnie-the-Pooh and Wind in the Willows by British artist Ernest Howard Shepard.

TMAG will be opening late for the Kids’ Disco Night on the Friday of the festival, with youngsters encouraged to dress up as their favourite animal and bring their families along for a night of fun at the museum.

For the Festival Finale on Sunday 30 April, the museum will also be a hive of activity, with lots to do across the whole museum including face painting, live music, Reptile Rescue demonstrations, puppet performances and more.

The festival is generously supported by the City of Hobart, and members of the TMAG Children’s Reference Panel have once again provided advice and input into the festival program.