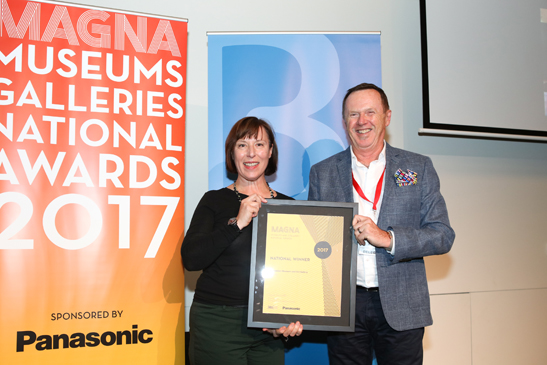 Visitor numbers at the Tasmanian Museum and Art Gallery (TMAG) have continued to rise steadily over the past financial year.

TMAG experienced a five per cent growth in visitor numbers to 403,662 at its city site, with the average daily visitation at 1238, well ahead of the 1125 target.

In addition, TMAG’s other facilities including Narryna Heritage Museum, Markree House Museum and Garden, the Tasmanian Herbarium and the Rosny Collection and Research Facility attracted a combined 11,510 visits, contributing to an overall total of 415,172 across all sites during 2016-17.

TMAG’s continued success in delivering a vibrant and engaging schedule of exhibitions and programs have contributed to the growth.

Exhibitions such as Tempest, kanalaritja: An Unbroken String and One Hell of an Inferno: The 1967 Tasmanian Bushfires generated very positive feedback from visitors.

These exhibitions were also recognised at the Museums and Galleries National Awards (MAGNAs) in May 2017, with Tempest also named the overall national winner, a huge honour for the museum.

The second TMAG’s Children’s Festival held in April with continued support from the City of Hobart, built on the success of the first and attracted a record average daily attendance across five days of 2780 visitors, with a festival total of 13,900.

The success TMAG has achieved in 2016-17 demonstrates the museum’s ability to strongly deliver on the goals established in its Strategic Plan, particularly in creating an involved community through well attended exhibitions and programs.

In this way, TMAG is also supporting the Government’s goal to grow the cultural and creative industries sector by contributing to the visitor economy and building Tasmania’s brand.