New display recognises the 30th anniversary of the 1988 Salamanca protests 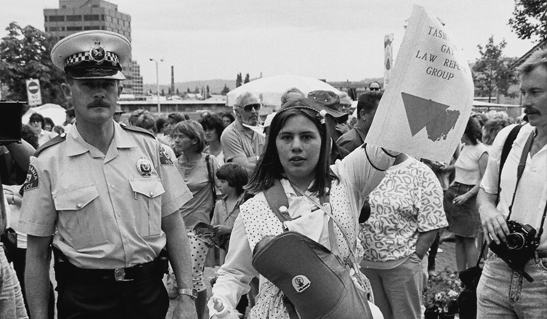 A new display recognising 30 years of the campaign for LGBTI equality since the 1988 Salamanca protests opens at the Tasmanian Museum and Art Gallery (TMAG) today.

“We’re not going to the mainland” opens as part of The Power of Change gallery at TMAG. The display includes historic photographs, objects, documents, and audio-visual components that detail key events and milestones, starting with the 1988 Salamanca protests and leading to the 2017 postal survey that resulted in the legalisation of marriage in Australia for same-sex couples.

The display particularly focuses on the 1988 arrests of gay-rights supporters who were protesting the Hobart City Council’s banning of the Tasmanian Gay and Lesbian Rights Group’s Salamanca Market stall.

Protests and rallies went on for weeks following the ban, and resulted in the arrests of 130 men and women. The movement grew into Australia’s largest civil disobedience action for gay law reform and began a nine-year campaign to repeal Tasmania’s anti-gay laws.

The title “We’re not going to the mainland” refers to a protest banner in the display and was a slogan that was picked up by the community.

Marking the 30th anniversary of the protests, the display provides an important insight into the impact the arrests had on LGBTI law reform in the state, and subsequently nation-wide.

In putting together the display, TMAG’s curators actively sought material for the Collection that represented this event including recording six oral histories with participants of the Salamanca protests.

TMAG’s Senior Curator, Cultural Heritage Elspeth Wishart notes, “It has provided TMAG with an important opportunity to develop relationships with the community and collect significant material.”

“Reaching out to the community to document contemporary stories and issues relevant to Tasmanians is an identified strategic focus for the museum. We will continue to collect material to ensure we cover all aspects of contemporary social issues”, she said.

It is also the first time that TMAG has displayed the Salamanca protests photographs since they were added to the Collection. The photographs have come from the Mercury newspaper, who reported on the protests and arrests at the time, and many of the objects and documents have been presented to the museum by people involved in the events.

“We are delighted to have the opportunity to display this material which provides the chance for our visitors to engage with this important Tasmanian story”, Ms Wishart said.

Mr Richard Hale, a founding member of the Tasmanian Gay and Lesbian Rights Group’s Salamanca Market stall and a Program Delivery Officer at TMAG says, “TMAG seeks to be a welcoming destination for our diverse range of visitors and so I am proud that we are able to share this positive story about the campaign for LGBTI equality and human rights in Tasmania”.

“We’re not going to the mainland” is on display within The Power of Change gallery from Friday, 19 October 2018 until 2020.