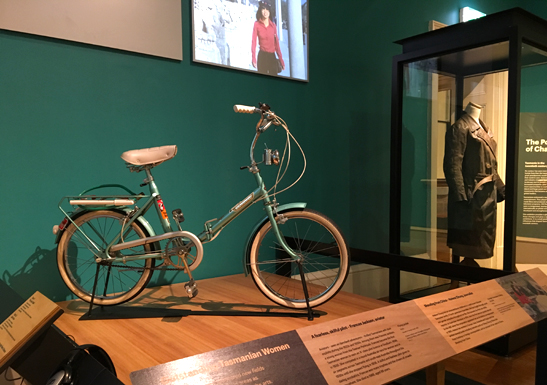 On International Women’s Day, the Tasmanian Museum and Art Gallery (TMAG) is celebrating the achievements of two outstanding Tasmanian women in a new display.

Frances Jackson was one of the new breed of daredevil adventurers who thrilled Tasmanians with their aviation exploits during the 1920s and 1930s.

Hailing from the Tasman Peninsula, Frances became the first Tasmanian woman to earn an ‘A’ class pilots licence at Goulburn, NSW, in 1930.

She competed in a round-Australia air race for women and flew in air pageants across Tasmania and south-east Australia throughout the 1930s until she stopped flying in 1938.

A skilful and fearless pilot given to daring acrobatics, Frances won many trophies and the cheers of crowds everywhere. She died in 1988, aged 86 years.

Visitors to the display can see Frances’ leather flying jacket which she wore during her flying career in the 1930s.

Also profiled is Helene Chung, who became the first non-white reporter on Australian television in 1974, then the first woman posted abroad by the ABC when the corporation appointed her as its Beijing correspondent in 1983.

Helene had an unconventional childhood in a well-known Chinese Tasmanian family, and as a fourth generation Australian, she fought through racial and gender prejudice throughout her life.

As a journalist, she has worked in Europe, Asia, Australia and Egypt and has written several books including memoirs such as Ching Chong China Girl: From fruitshop to foreign correspondent, and an account of her years in China, Shouting from China.

On show in the display are the bicycle Helene used to cycle around during her time in Beijing, as well as a film clip of her reporting on the Szechwan ‘panda crisis’ in 1984 for ABC TV.