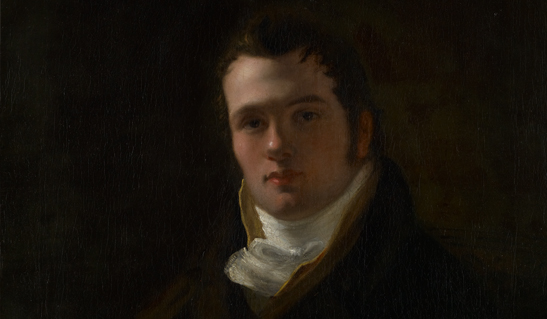 A significant artwork by celebrated colonial artist Thomas Griffiths Wainewright, Portrait of Henry Foss, c 1820 has recently been acquired by the Tasmanian Museum and Art Gallery (TMAG).The acquisition has been made possible with the generous support of the TMAG Foundation Limited.

Wainewright is arguably the best known and most skilled portraitist from colonial Australia. He was convicted of forgery and transported to Hobart in 1837 where he died 10 years later. Prior to transportation, Wainewright lived the high life in London. He was a dandy and noted art critic, as well as an artist and collector. Intriguingly, he was also suspected of poisoning three family members to access inheritances. While the murders were never proven, he was the inspiration behind several characters in novels by writers including Charles Dickens and Oscar Wilde.

Henry Foss was Wainwright’s second cousin who shared his interest in antique prints and manuscripts. The portrait is likely to be a token of their friendship rather than a formal commission. The Portrait of Henry Foss provides a compelling link between the artist’s free and luxurious life in London and the celebrated Tasmanian portraits he produced as a convict and in his final year as a free yet impoverished man. Ultimately, the Foss family played a leading role in Wainewright’s conviction.

TMAG currently owns 10 of the approximately 50 portraits that Wainewright created during his time in Hobart. All others are works on paper and are rarely available for acquisition.

Mr Geoff Willis, Chair of the TMAG Board of Trustees, said the museum was delighted to have the opportunity to acquire such a significant artwork for the State Collection.

“We are extremely grateful to the TMAG Foundation for their support in helping TMAG to take advantage of this rare opportunity to acquire one of only three surviving oil works by Wainewright created during his life in London.”

Colin Thomas, the Chair of the Tasmanian Chapter of the Australiana Society, unveiled the portrait to TMAG Foundation supporters at a recent fundraising dinner.

“Portrait of Henry Foss is a work of exceptional quality that successfully strengthens and develops TMAG’s collection of colonial and nineteenth century art that has been identified as a priority acquisition area for TMAG”, Mr Thomas said.

The acquisition of the work also creates an opportunity to undertake further research and establish greater knowledge of the materials and techniques Wainewright used in London. While Wainewight’s biography is relatively well-known, almost no prior research has been conducted into his artistic practice and personal collection in London during the 1820s.

Portrait of Henry Foss is now on display in TMAG’s Dispossessions and Possessions colonial gallery. 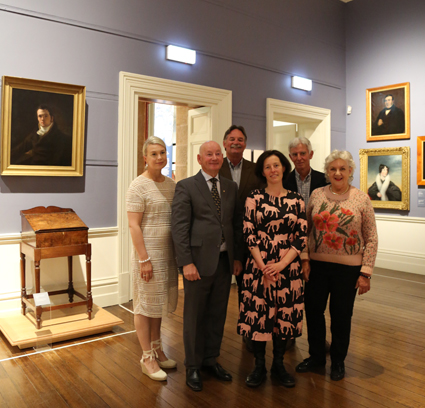