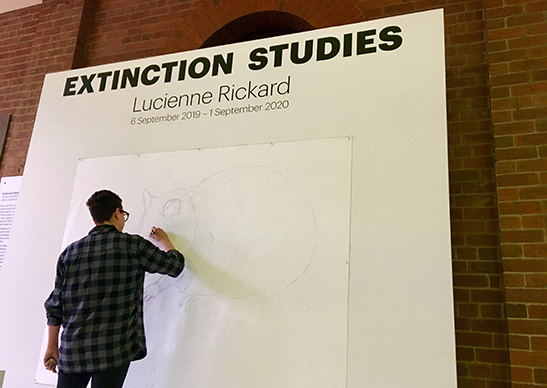 The Tasmanian Museum and Art Gallery (TMAG) today launched a unique and significant new artist-in-residence project that aims to raise awareness of the critical issue of species extinction.

Extinction Studies is a year-long performance by Lucienne Rickard, which will see the Tasmanian artist draw a different recently-extinct plant or animal species every day.

Lucienne will then erase each drawing and, the next day, draw a different extinct species on the same sheet of paper, continuing the process daily until the paper deteriorates and eraser shavings accumulate.

She will be based in TMAG’s Link Foyer five days a week until 1 September 2020 to undertake Extinction Studies, offering members of the public the chance to observe her at work throughout the year.

TMAG’s Deputy Director Engagement, Andy Baird, described the uniqueness and significance of the project for the museum.

“It is distinctive for TMAG, firstly in hosting such a publicly accessible artist-in-residence over a whole year and secondly in drawing attention so literally to the critical issue of species extinction,” Andy said.

“Bringing art and science together is an obvious thing at TMAG given our role as a museum and art gallery, however this is the first time we have presented a durational performance project in this way.

“We hope that Lucienne’s very graphic representation of species we’ve lost, through the process of drawing and erasing, will help to sharpen our visitors’ awareness.

“In Tasmania we have over 680 listed threatened species, and globally over a millions species are threatened with extinction. We need our minds sharpened and hearts opened more than ever.”

Each extinct species will be sourced from the International Union for Conservation of Nature’s Red List of Threatened Species, the authoritative list of extinct and threatened species used by scientists globally.

The project title Extinction Studies deliberately merges art and science, a ‘study’ being both a technical art term – for a drawing or sketch done in preparation – and more generally understood as the practice of devoting time and attention to understanding a topic.

The project has been commissioned by Detached Cultural Organisation and presented by TMAG, with its opening coinciding with National Threatened Species Day on Saturday 7 September and TMAG’s threatened species-themed Discovery Day on Sunday 8 September.

Visitors to Discovery Day will be able to practice their skills at saving stranded whales alongside the Parks and Wildlife Service, learn more about Tasmania's best-known extinct species the thylacine, go on a special trail to discover Australia’s endangered marine animals, and much more.

Extinction Studies is on show in TMAG’s Link Foyer until 1 September 2020. TMAG’s Discovery Day is taking place on Sunday 8 September, with a full program available here.

Image details: Lucienne Rickard at work in the Link Foyer on the opening day of Extinction Studies.