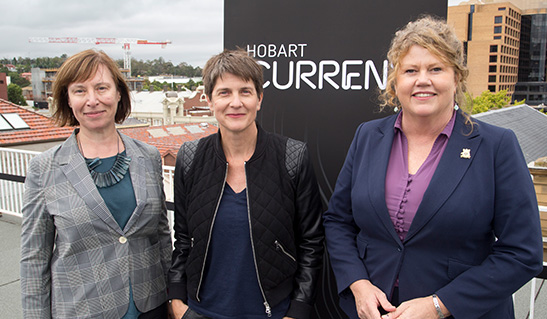 The Tasmanian Museum and Art Gallery (TMAG) and the City of Hobart have announced the Creative Director for the inaugural Hobart Current.

Hobart Current is an innovative long-term partnership between the two organisations, which replaces the 27-year-old City of Hobart Art Prize. It is a major biennial program that will nurture and showcase contemporary artists working across different media, which may include visual art, performance, music, film, design, and literature, culminating in an exhibition every two years.

‘The City of Hobart Art Prize model served its purpose for a long time but it was time for a change,’ said Lord Mayor Anna Reynolds. ‘Hobart Current allows us to support Tasmanian artists in a more powerful way, by providing a significant non-acquisitive opportunity.’

The first exhibition will open in September 2020 at TMAG as well as at two locations in Hobart’s CBD.

A new Creative Director is appointed for each two-year cycle. They set the theme and select ten artists to participate, each of whom will be commissioned to create a new work for the exhibition. At least six of the ten chosen artists will be Tasmanian.

Following a national recruitment process, Ms Rosie Dennis has been appointed as the Creative Director for Hobart Current in 2020. Ms Dennis is best known for creating large-scale, intercultural, place based experiences, including as the Artistic Director of Urban Theatre Projects in Sydney. She will work with an advisory panel of leading Tasmanian arts organisations to select the first group of Hobart Current artists.

‘I’m really looking forward to meeting artists and the wider community and immersing myself in the rich cultural ecology across the state,’ said Ms Dennis.

TMAG Director Janet Carding said the first Hobart Current will be a landmark exhibition. ‘We are delighted to be at the forefront of supporting contemporary Tasmanian artists by commissioning new works and providing an opportunity for increased exposure nationally.’

‘Hobart Current is aligned with TMAG’s goal to tell Tasmanian stories and we are particularly excited to be developing a major public and education program alongside the exhibition.’

Rosie Dennis’ chosen theme for the inaugural exhibition is ‘Liberty’.

‘This theme can be interpreted globally and locally, as celebrating the nation as a whole or a neighbourhood. I’m interested in sparking a fuller conversation about who chooses freedom for whom, in what space and during what time,’ Ms Dennis said.

Hobart Current is presented in partnership between the City of Hobart and the Tasmanian Museum and Art Gallery.