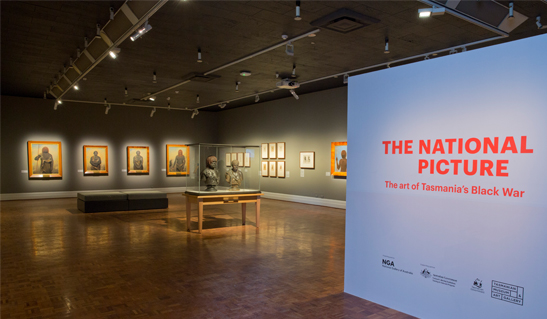 The Tasmanian Museum and Art Gallery (TMAG) is delighted that a major exhibition, The National Picture: the art of Tasmania’s Black War, presented by the National Gallery of Australia in partnership with TMAG, has been recognised at the 2019 Museums and Galleries National Awards (MAGNAs).

The MAGNAs, an initiative of the Australian Museums and Galleries Association, celebrate outstanding achievements in the Australian museums and galleries sector in the categories of exhibition, audience engagement and learning, and Indigenous programs.

The awards took place in Alice Springs last night during the Museums and Galleries national conference.

The National Picture: the art of Tasmania’s Black War was announced as the joint winner of the Temporary or Travelling Exhibition category, Level 3, along with Museums Victoria's LOVE, and was also highly commended in the Indigenous Project or Keeping Place category, Level 3.

The National Picture: the art of Tasmania’s Black War, co-curated by Professor Tim Bonyhady of the Australian National University and Dr Greg Lehman, from the University of Melbourne, presented a range of colonial artworks and contemporary responses to frontier conflict in Tasmania drawing on key loans from national and international collections including works from TMAG, the Queen Victoria Museum and Art Gallery, and the British Museum. Many of the works on show were returned to Tasmania for the first time in 190 years.

The curators sought to shed new light on two under-examined figures in Australian history: Benjamin Duterrau, who was the first colonial artist to document the culture of Aboriginal Tasmania, creating Australia’s first history painting, and the ‘Conciliator’ George Augustus Robinson, who was responsible for the exile of Aboriginal survivors of the Black War.

Co-curator, Dr Greg Lehman said that while the exhibition was about colonial Tasmania, it had immense national significance,

“The events in Tasmania during the 1820s are an intense example of processes occurring across Australia. By understanding what happened here, Australians can open their eyes to the experience of Aboriginal people in almost every locality.

“This is the first national exhibition to focus on Australia’s frontier wars. We hope that more will follow.”

Director of TMAG, Ms Janet Carding said that she was very pleased that such an important and complex exhibition as The National Picture: the art of Tasmania’s Black War had been recognised on the national stage.

“We are proud to have collaborated with the NGA, as well as institutions and collectors from around Australia and internationally to bring this exhibition to life”.

“It is wonderful that TMAG’s exhibitions program has been consistently recognised by our peers in the museums sector over the past three years.

“At TMAG, we aim to develop strong partnerships that allow us to create exciting and innovative projects.

The National Picture: the art of Tasmania’s Black War is a fantastic demonstration of what can be achieved when institutions within the museums sector collaborate and work together and we are thrilled that this exhibition of national significance has now been honoured at a national level”.

For more information about the MAGNAs, and a full list of winners, visit the Australian Museums and Galleries Association website.

Image: The National Picture: the art of Tasmania’s Black War exhibition at the Tasmanian Museum and Art Gallery