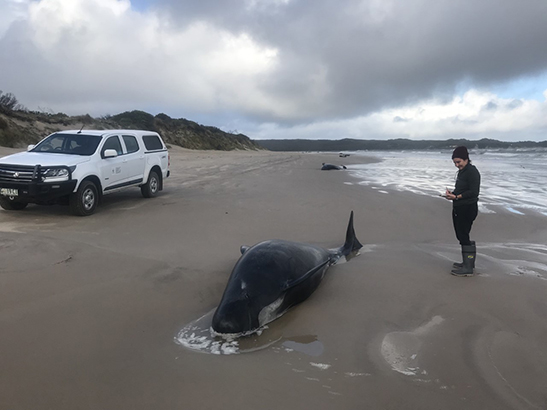 About 460 long-finned pilot whales were discovered beached at Macquarie Harbour and Ocean Beach near Strahan, and while rescuers were able to save about 110 animals, at least 350 sadly died.

Belinda Bauer and Kirrily Moore from TMAG’s Zoology team assessed and documented over 250 deceased whales over the course of stranding.

They undertook tissue sampling, measurements, sex determination and assessed the reproductive states of the dead whales at Betsy’s Bay and other locations.

The majority of the deceased animals were females; many of whom were lactating. 40 juvenile whales were also recorded.

This is not unusual in pilot whale pod structure where pods have close matrilineal relationships and adult females (mothers and grandmothers) tend to outnumber adult males. Of the 88 adult males sampled, the largest was just over 6 metres in length.

One bottlenose dolphin was also discovered deceased. This animal was a large female, over 3 metres long and heavily pregnant. Bottlenose dolphins and pilot whales are known to cohabit and forage together at sea and it is most likely that this animal died as part of the larger mass stranding. 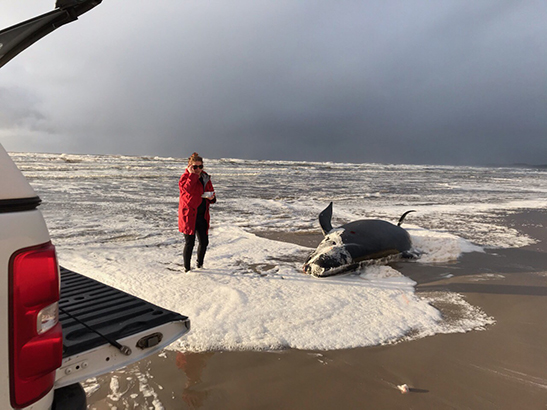 Belinda and Kirrily both described the scale of the event as overwhelming and working on site with many dead animals in remote locations battling inclement weather as tough going.

The stranding provided TMAG’s Zoology team with an important opportunity to capture as much data as possible regarding the species.

The tissue samples collected have been stored in ultra low-temperature freezers at TMAG’s Rosny Collections and Research facility. Cryopreservation of the tissues is best practice in preserving the DNA and they will be available to researchers from around the world who have already expressed interest in studying them.

The samples not only provide an important physical record of the stranding, but will also help researchers understand how the whales are related to each other and contribute to our knowledge of the species’ biology and behaviour.

Material has also been collected to assess the internal injuries sustained by animals which may provide insights into the cause of the stranding.

“While this is undoubtedly a tragic incident, our best hope is that the data and samples we collect will help provide insights into these incidents, and holding physical evidence of the event in long-term storage means that we can revisit and answer questions about whale strandings with technologies that may not even exist yet,” Belinda said.

If you would like to learn more about the whales found in Tasmanian waters, check out this Facebook Live Mystery Tour of the cetacean collection with Belinda.

Image details: (top) Kirrily Moore recording details of whales at Ocean Beach, near Strahan.
(middle) Belinda Bauer on the scene of the stranding at Ocean Beach.
(below) Dead whales at Betsy’s Bay in Macquarie Harbour. 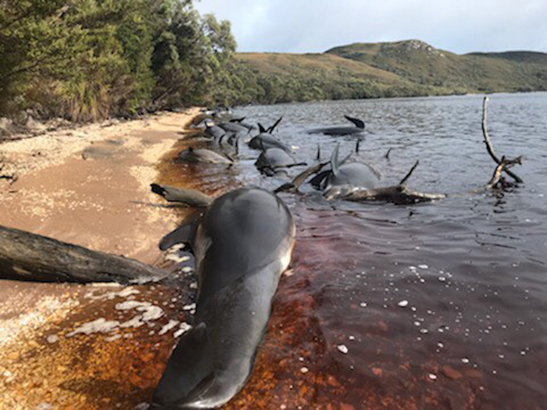