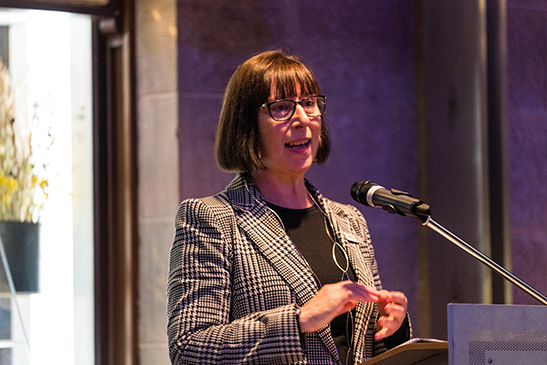 The Tasmanian Museum and Art Gallery (TMAG) is celebrating the achievements of outgoing Director Janet Carding, who is leaving the museum this week to take up a new position in Sydney.

During her time at TMAG, Janet has overseen a number of important initiatives, including the implementation of the Tasmanian Museum and Art Gallery Act in 2017 which saw TMAG become a statutory authority, as well as establishing a long-term vision for the museum through the development of two Strategic Plans.

She has also represented TMAG’s role nationally in the cultural sector as the Tasmanian chair and National Executive member of the Australian Museums and Galleries Association.

Janet said it had been a pleasure working with the staff and volunteers of TMAG, and getting to know the museum’s community of partners and supporters.

“I’m very proud of what we’ve achieved together, with initiatives ranging from our new space for children mapiya lumi | around here, as well as our award-winning exhibitions such as Tempest and Julie Gough: Tense Past,” Janet said.

“We have also developed our successful annual Expeditions of Discovery that have led to new species being discovered in Tasmania and started our transformation to become a digital first organisation.

“Importantly, we also have also begun taking responsibility for the organisation’s past practices with the Apology to Tasmanian Aboriginal People made earlier this year.

“I am sure that TMAG will continue to thrive and I look forward to seeing what is still to come.”

Chair of TMAG’s Board of Trustees, Brett Torossi, said the Trustees offered Janet their deepest thanks for her stellar leadership over the last six years.

“Janet's professional and exemplary commitment to TMAG has been outstanding and we are very proud of all we have achieved under her Directorship,” Brett said.

“We hold Janet in the highest regard, wish her all the very best and know that she will always be a treasured part of the TMAG family.”

Janet will take up the position of Executive Director of the Sydney Harbour Federation Trust later this month.

Director of Arts Tasmania, Dr David Sudmalis, will serve as Acting Director of TMAG while a national executive search is undertaken to fill the position.