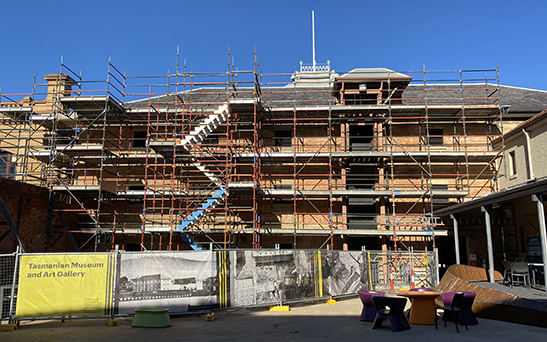 Significant works are now underway at the Tasmanian Museum and Art Gallery (TMAG), which will assist in protecting the museum’s important heritage buildings and collection for years to come.

Over the coming months, the slate roof of the Bond Store will be replaced and its exterior re-rendered to preserve the historic brickwork, and work will also be undertaken to stabilise and re-render the Watergate wall.

Hansen Yuncken has been contracted to undertake the works, which have been funded through the Tasmanian Government’s Public Building Maintenance Fund (Economic Stimulus and Recovery Program) and the joint Tasmanian and Australian Government Southern Extreme Weather Event Recovery Fund.

Built between 1824 and 1826, the Bond Store was originally a warehouse used for storing supplies for the Van Diemen’s Land colony, including dry goods such as grain, as well as bonded goods including tobacco and spirits.

A brick-and-stone wall with a large centrally-positioned entrance was constructed in 1826, connecting the Bond Store to the Commissariat Store. This entrance became known as the Watergate, because at that time it looked out towards the Hobart Rivulet inlet and the causeway to Hunter Island.

“Damage occurred to the Watergate Wall during the May 2018 Hobart storm event, and stabilisation and conservation of the wall is urgent and essential to preserve this important part of the historic Commissariat Complex,” Simon said.

“We have undertaken extensive investigations, including an archaeological dig, at the foot of the Watergate Wall in order to identify the best way to stabilise it, which has been determined to be with steel supports set in concrete.

“Contractors will also be repointing and reapplying lime render to help preserve the historic brickwork of both the Watergate Wall and the Bond Store, which is beginning to deteriorate due to damp and salt attack.

“The batons and slate of the Bond Store roof will also be replaced, which will ensure the roof of this important building is watertight and the TMAG collection remains protected.”

The reapplication of lime render will mean that the exterior of the Bond Store and the Watergate wall will look quite different following the works.

“We understand that the new look of the Bond Store and Watergate Wall may be a big change for those used to the familiar red brick exteriors, however archival photographs and physical evidence indicates that the Bond Store had been rendered in the past,” Simon said.

“In this way, re-lime rendering the walls will return the building to be closer to its original state, as well as protecting the brickwork.

Due to the works, the gallery Our Land: parrawa! parrawa! Go Away! on level 2 of the Bond Store will be closed to visitors until November 2022, and an area of the courtyard will also be closed off until all building works are completed.

“While the works will have an impact on the TMAG site due to disruption in the courtyard and area surrounding the Watergate entrance, and the closure of the parrawa parrawa gallery, they are important in order to protect TMAG’s buildings and collection for another 100 years,” Simon said.

“We apologise to our visitors for any inconvenience, and we look forward to sharing with them the finished works once they are complete in the first half of 2023.”