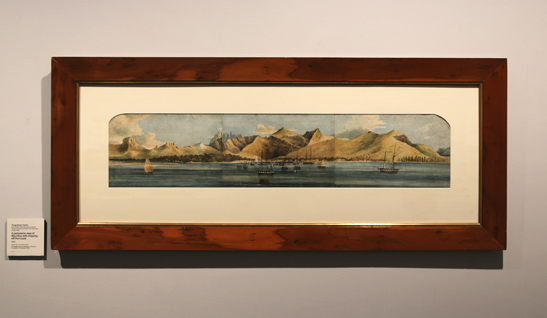 Stunning panoramas of Hobart and beyond are the stars of a new exhibition now open at the Tasmanian Museum and Art Gallery (TMAG).

Panoramic Views displays treasures from the museum's significant and extensive 19th century colonial watercolours and drawings collection, including several works that have not been on show in living memory.

Panoramas were originally the brainchild of Irish-born painter Robert Barker, who in 1787 patented a method for capturing and displaying a 360° view inside a circular room, and in 1791 opened a purpose built hall advertising 'panoramas' in Leicester Square, London.

The comprehensive nature of panoramas also appealed to early colonists as a means of documenting Australia's growth and rising prosperity, as panoramas could concisely show the transformation of natural landscape into European settlement. They were also used to encourage further immigration from England and continental Europe.

Panoramic Views includes panoramas by well-known artists such as Louisa Anne Meredith, Eugene von Guerard and Thomas J Lempriere, as well as those who are unknown, such as the anonymous creator of an 1830 vista of Hobart Town.

Some artists have primarily recorded architectural and topographical details with acute accuracy, while others have been more concerned with atmosphere and the picturesque qualities of the landscape.

Perhaps the most impressive work in the exhibition is a full 360° view of Hobart Town in 1848, which stretches for nearly two metres across six sheets of paper. It was drawn by Lady Jane Franklin's nephew, F G Simpkinson De Wesselow, an English naval officer who travelled extensively in Tasmania producing skilful landscapes which display his superb sense of colour.

Also on display as part of the exhibition are sketchbooks from notable artists, including John Glover and Mary Morton Allport, which feature more illustrations of spectacular landscapes.

Panoramic Views is on show in TMAG's Salon Gallery until 17 January 2016. To read more about the works in the exhibition, download the room brochure here. 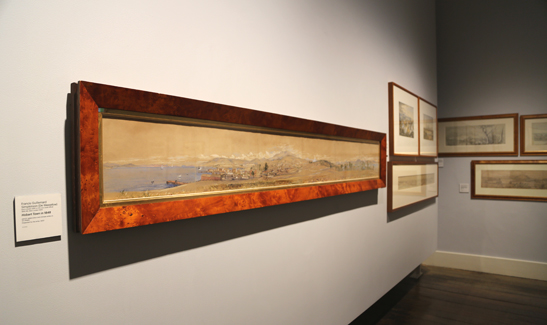