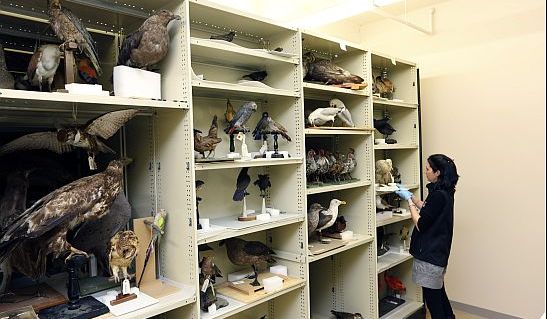 The Tasmanian Museum and Art Gallery’s (TMAG) zoological collections represent an astounding array of Tasmanian animals, ranging from shells of the tiniest micro-molluscs to giant squid and the skeletons of large whales – they comprise the largest collection of Tasmanian fauna in the world. These specimens represent more than 150 years of museum acquisitions, consistent with TMAG’s origins in the Royal Society of Tasmania and its emphasis on developing collections that can serve both to illustrate Tasmania’s natural history and to advance knowledge in this area.

The animals in the collections are derived from individual and institutional donations, as well as from collecting trips and systematic surveys from around Tasmania and beyond.  They include many specimens of great scientific and historical importance that can never be replaced.

Examples are of these include the large number of ‘type’ specimens – effectively, the specimens that ‘define’ a particular species because they were used as the basis for the original formal description of the species in question.  The earliest of these date from the mid-19th century, with continued additions as further new species are described.

More recently, the Zoology Unit has begun assembling an important collection of tissue samples from vertebrate animals, including stranded whales. These provide vouchered material for DNA sequencing in research projects in areas such as population genetics, phylogenetics and predator-prey interactions, with important input into conservation, ecological and evolutionary studies.

Using material from the collections, Zoology Unit staff contribute to the design and content of exhibits throughout the museum – particularly in the Earth and Life, Thylacine, and Our Living Land: Encountering an Upside Down World galleries. The animals placed on display represent the tip of a very large iceberg, whose full extent covers most groups of Tasmanian animals such as sponges, jellyfish, worms, molluscs, crustaceans, spiders, millipedes insects, seastars, amphibians, reptiles, fish, birds and mammals.

The main collections are far more extensive, in terms of both the number of species they represent and the number of specimens of individual species. Keeping many individuals of a given species is important because it provides information on variation within that species and its geographical distribution. Variations over time can also be detected, for instance in response to climate change.

Specimen-based records such as museum collections are vitally important as validated data for scientific research and other users of biological information. For example, there have been many cases where cryptic new species have been found in TMAG’s collections. These discoveries are impossible to verify unless museums curate comprehensive collections of individual animals, which can be systematically examined for such hidden species. Similarly, holdings of specimens are usually the only definitive evidence for the existence of a species in a particular area at a certain time, information that is vital for diverse fields such as conservation and pest incursions.

TMAG’s zoological collections are housed in dedicated buildings at the museum’s Collections and Research facility in Rosny. These comprise climate-controlled ‘spirit’ and ‘dry’ storage areas, freezers for tissue storage, laboratories and preparation rooms.  Most ‘spirit’ and ‘dry’ material is stored in dedicated metal or wooden cabinets on compactus shelving. Currently, the wet and dry collections together comprise at least half a million specimens.

TMAG’s ‘spirit’ collections comprise those vertebrate and invertebrate specimens for which there is a need to preserve soft tissue, typically in ethanol. This is the only practical way to maintain a scientific collection of many soft-bodied animals, such as jellyfish, earthworms, insect larvae and shrimps. It is also an important technique for maintaining the integrity of many other animal specimens, such as fish, molluscs, corals and lizards. These days, such specimens are finding use in molecular studies using DNA to explore the evolutionary relationships among species. Increasingly, fresh tissue samples are stored in a dedicated deep-freezer, for optimum preservation of DNA.