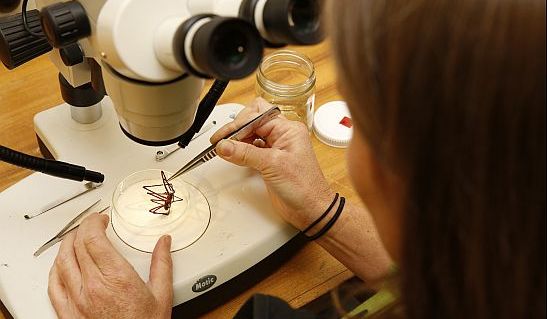 Zoology Unit staff engage in research on a wide range of topics relevant to the collections and to the fauna of Tasmania and Australia more generally.  They publish their findings in peer-reviewed academic journals, including TMAG’s in-house journal Kanunnah.

For example, Dr Catherine Byrne conducts research on Australian native moths in the family Geometridae (earth measurers or loopers). She is currently working on revisions of four genera of geometrids: the Western Australian Omoplatica, mainland Lipogya and two genera found in Tasmania as well as mainland Australia, Nisista and Scioglyptis, with descriptions of approximately 15 new species. She is also continuing her work on a sub-family of the Geometridae that are well-represented in the montane areas of Tasmania, the Archiearinae, by supervising a revision of the genera Acalyphes and Dirce, including two new species.

Dr Simon Grove has designs on formally describing new species of Tasmanian beetle in the genera Neopelatops, Dryophthorus, Exithius and Lissotes as well as some Tasmanian deep-water gastropod molluscs. Additionally, he maintains comprehensive databases and websites for Tasmania’s marine molluscs and forest beetles, based in large part on TMAG material.

The Zoology Unit also regularly receives visits from Australian and international researchers interested in making use of the collections for their scientific research.  Some researchers are long-term collaborators. For example, Dr Dave de Little is revising the Tasmanian species of a genus of leaf-beetle Paropsisterna, including describing a new species that has recently been recognised as a pest of exotic eucalypts in Ireland.