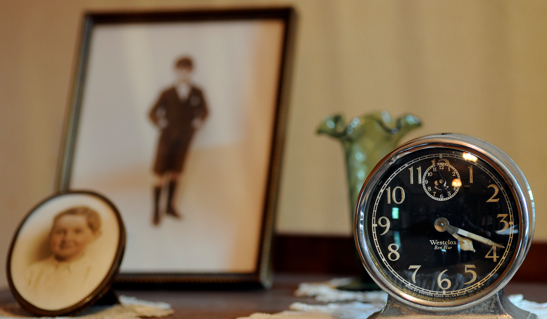 Markree, an intimate house museum and garden, is one of Hobart's hidden treasures. Markree was built in 1926 for Cecil and Ruth Baldwin. The house, collection and garden all reflect the influence of the Arts & Crafts Movement. Its 1920s Tasmanian oak and blackwood furniture is by local cabinetmakers Coogan and Vallance & Co. The house also contains heirlooms from Ruth Baldwin's family – the Manings, Knights, Fletchers and Hones – who had come to Hobart in the 1820s as merchants, civil servants and lawyers.

Markree's rare 1920s Arts and Crafts garden was laid out by Cecil Baldwin who had studied at the Burnley School of Horticulture, Melbourne. The leading Australian garden designer, Edna Walling had also studied at Burnley. Cecil Baldwin and Edna Walling probably knew each other through projects at Ferntree and Sandy Bay, Hobart. Visitors to Markree will enjoy echoes of Edna Walling's gardens.

Cecil and Ruth Baldwin's son Henry (1919–2007) left Markree, its contents and a significant endowment to the Tasmanian Museum and Art Gallery for the benefit and enjoyment of the people of Tasmania. This was one of the largest single bequests ever received by an Australian gallery. Markree specialises in the social history and design of the early twentieth century (1900–50). Changing displays are arranged to highlight themes such as the Arts & Crafts Movement, women's domestic artwork and 20th century architecture, garden design, decorative arts and social history.

Access: The ground floor of Markree has complete wheelchair and mobility access.
Due to the age of the building there is limited mobility access to the first floor and garden.