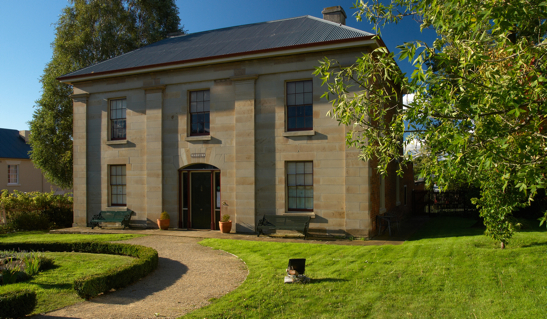 Located within 20 minutes’ walk from the Tasmanian Museum and Art Gallery, Narryna is an 1830s merchant’s house linked to the origins of Salamanca Place and Battery Point.

The fine Georgian town house was built by Captain Andrew Haig in 1837-40. Haig was originally a Calcutta-based merchant licenced by the British East India Company to trade with China through Canton (Guangzhou).

Haig purchased the land holding in 1824 when he sailed into Hobart to have his ship repaired ahead of crossing the Pacific to sell the remainder of his China Trade cargo in Valparaiso.

In 1834 Haig built Salamanca Place’s first warehouses and set up as a merchant, shipbuilder and whaler. He was forced to sell up after an economic downturn hit Sydney in 1842.

Narryna was later the residence of Hobart businessmen and women, lawyers, politicians and bankers. In 1955 it became Australia's first folk museum through the efforts of Hobart residents who formed a collection that is redolent of the mercantile and maritime histories of Salamanca Place and Battery Point.

Step into Narryna for a rich experience of early colonial life.