2021 Australian of the Year Awards 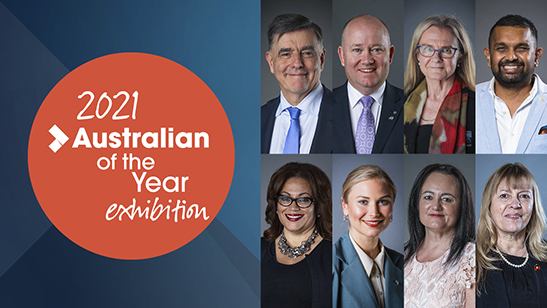 Celebrate the eight extraordinary state and territory recipients of the 2021 Australian of the Year Awards, including national winner, Tasmania’s Grace Tame.

Learn about their lives, aspirations and experiences through objects of personal significance, including a bronze nozzle from a firefighting hose, a well-travelled statuette of Ganesh and a symbolic painting reflecting a journey through medical training.

Grace Tame, a survivor of sexual assault and advocate for others, has chosen as her object a book with the first 5 000 names of individuals who supported her campaign to change Tasmania’s state law that prevented survivors of sexual assault from speaking publicly about their experiences.

The book reminds her of the tremendous support she has had in Australia and overseas through the #LetHerSpeak campaign and represents a new future for survivors.

Each year, Australia celebrates the achievements and contributions of extraordinary people through the Australian of the Year Awards, which honour leading citizens who are role models for all.

This exhibition is an annual celebration of the recipients jointly created by the National Museum of Australia and National Australia Day Council.