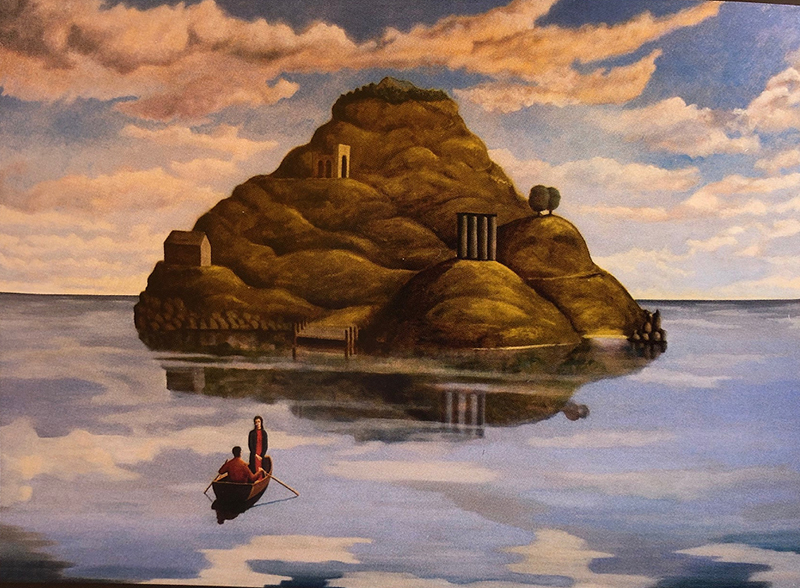 David Keeling (born Launceston, 1951) is a critically acclaimed Australian artist who has spent nearly 40 years exploring Tasmania and its narratives, past and present.

David Keeling: Stranger is a survey exhibition featuring more than 70 artworks dating from the 1980s. While the complexity and flaws of the landscape tradition remain a central concern for Keeling, he has also been influenced by international art movements – particularly surrealism and symbolism – to establish a truly unique oeuvre.

A regular visitor to the Tasmanian Museum and Art Gallery (TMAG), Keeling has drawn from its iconic collection items such as colonial paintings by John Glover and William Buelow Gould, taxidermy animals, Governor Arthur’s Proclamation Board, and Fanny Cochrane Smith’s recorded song. Distinctive Tasmanian scenes are also prevalent throughout his artwork, aligning the exhibition brilliantly with TMAG’s ambition to ‘tell Tasmanian stories’.

The exhibition title refers to an unsettling presence – a stranger – in nearly every one of Keeling’s landscapes which have been ‘invaded’ by unfamiliar people and objects. In the more recent paintings of Tasmanian forests, the viewer becomes the stranger as they are invited to enter into the uninhabited environments. These incursions represent the tie between the land and the infinite narratives that play across it, while also acknowledging the persistence of Tasmanian conflicts such as the brutal impact of colonisation, and the bitter environmental battles emblematic of the tension between ’progress’ and nature.

David Keeling: Stranger launches on the eve of his 70th year and celebrates the achievements of an artist at the height of his career. The exhibition is part of TMAG’s series recognising Living Tasmanian Artists that includes: Julie Gough: Tense Past (2019), Things I once knew: the art of Patrick Hall (2015), and Illumination: the art of Philip Wolfhagen (2013).