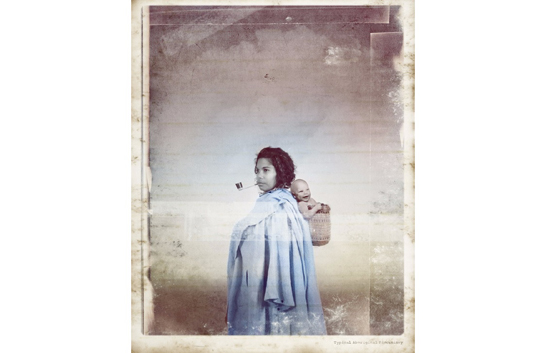 The Mission traces the journey of an Aboriginal woman from her homeland to a Christian mission, where she arrives in handcuffs. Life on the mission introduces her to Western clothing, food rations, tobacco, and even a husband. Yet, her baby is stolen following a Christian wedding. Symbolically, in the final image she returns to her Country.

“The existence of missions and reserves enabled the implementation of policies by which children of mixed Aboriginal and European heritage were forcibly removed from Aboriginal societies and placed in so-called ‘half-caste’ institutions where they were trained for service and assimilation into the vision of a white Australia. Such policies continued well into the 20th century, and the people directly affected by them are known as the Stolen Generations.”

Cook is a Bidjara man from Queensland who was given up for adoption by his biological mother shortly after his birth in 1968. While his adopted mother encouraged a strong understanding of Aboriginal culture, he “never felt that connection to [his] indigenous ancestry”.

Making art is his way of better understanding both Aboriginal culture and racial prejudice in Australia.

The Mission was created using a range of archival imagery, including family photographs and documents from his personal collection. The baby in two of the works is Michael himself.