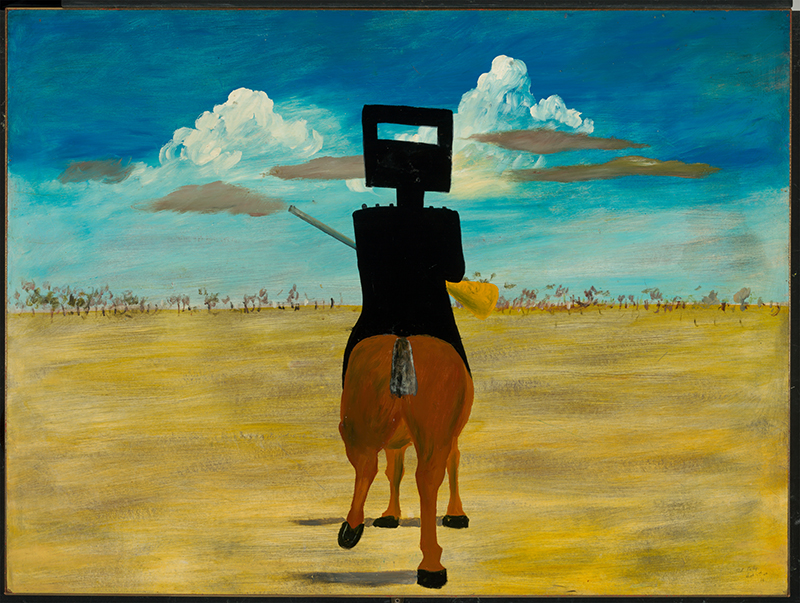 The Tasmanian Museum and Art Gallery is proud to present a travelling exhibition featuring some of Australia’s best-known and most beloved artworks, Sidney Nolan’s Ned Kelly series from the National Gallery of Australia.

Sidney Nolan’s 1946–47 paintings on the theme of the 19th-century bushranger Ned Kelly are one of the greatest series of Australian paintings of the 20th century. Nolan’s starkly simplified depiction of Kelly in his homemade armour has become an iconic Australian image.

Nolan’s paintings follow the main sequence of the Kelly story. Yet he did not intend the series to be an ‘authentic’ depiction of these events. Rather, these episodes became the setting for the artist’s meditations upon universal themes of injustice, love and betrayal.

The Kelly saga was also a way for Nolan to paint the Australian landscape in new ways, with the story giving meaning to the place. Above all, he considered that it was ‘a story arising out of the bush and ending in the bush’.

In 1977, Sunday Reed donated 25 of the 27 paintings in Nolan’s first exhibited Kelly series to the National Gallery of Australia. The series was first painted while Nolan was living with Sunday and her husband John Reed at their homestead, Heide, in Heidelberg, Victoria.

The exhibition's presentation at TMAG is supported by The Old Woolstore Apartment Hotel and Joy Anderson and the Estate of Neil Thomas.