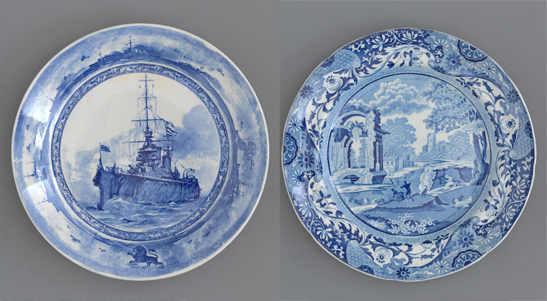 Blue and white ceramics are one of the earliest forms of popular culture and one of the world’s great design successes. They have been popular for over two centuries.

The Fifty Shades of Blue exhibition includes over 150 blue transfer printed plates from the TMAG collection, spanning from the late 18th century to the early 20th century.

They are displayed in the upstairs window cases in the Central Gallery and are organised into the five popular themes of exotic places and stories, classical antiquity, China, Britain and plants and flowers.

Fifty Shades of Blue and Studio Ceramics coincide with the 15th Australian Ceramics Triennale, 1 - 4 May 2019. Included in TMAG's ceramics celebration are Not So Easy and (Dis)placed.